Taxidermy’s rapid rise has cut across the culture, from hip cafés and the art world to department store vitrines. Brian Noone wonders if mounted carcasses are a permanent addition to our visual landscape or just a particularly long-lasting trend 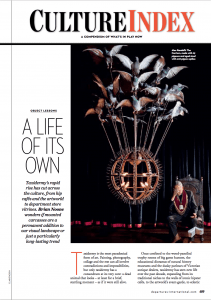 Taxidermy is the most paradoxical form of art. Painting, photography, collage and the rest can all involve contradictions and impossibilities, but only taxidermy has a conundrum at its very core: a dead animal that looks – at least for a brief, startling moment – as if it were still alive.

Once confined to the wood-panelled trophy rooms of big game hunters, the educational dioramas of natural history museums and the dusky parlours of Victorian antique dealers, taxidermy has seen new life over the past decade, expanding from its traditional niches to the walls of ironic hipster cafés, to the art world’s avant-garde, to eclectic hotels and boutiques looking to shake up their decor, to restaurants not afraid of reminding diners what they are consuming and, more recently, to the window displays of two of the world’s leading – and relatively conservative – department stores, Bergdorf Goodman in New York and Harrods in London. 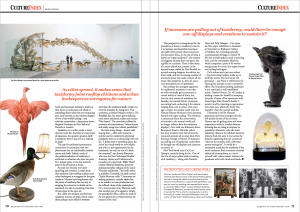 Taxidermy is, in other words, a trend that just won’t die. And after so many years of expansion, the question presents itself: is taxidermy here to stay or has it reached its peak?

The case for taxidermy’s permanence comes from its connection with two phenomena that are indubitably timeless: nature and death. Indeed, much of the professionalisation of taxidermy is attributed to urbanites who were too poor for a private aviary or zoo but wanted a piece of far-off nature at home.

As cities now become ever more sprawling and crowded, it makes sense that taxidermy joins rooftop chickens and urban beekeepers as surrogates for the great outdoors. Hunters have long known that the power of taxidermy lies not only in stopping the animal so its details can be examined, but also in conjuring memories of time spent in the open air.

But unlike the chickens and the bees, taxidermy mounts are dead, which makes them perhaps more effective memento mori than the traditional skulls, which can never be mistaken for being alive. That confusion, as Rachel Poliquin writes in The Breathless Zoo, her recent genre-defining tome about taxidermy, makes each mount “like theatre”. The contrivance allows for moments of transcendence, “where fantasy and reality merge into infinite possibilities”.

But then many things – theatre itself among them – offer such moments, and the case for taxidermy’s ephemeral popularity rests on its relationship with our era. “I think there is something about the rise of the virtual world we now inhabit and with it a new appreciation for the handmade, the real, the one of a kind, the corporeal,” says Joanna Ebenstein, who runs the New York-based Morbid Anatomy Library and Cabinet and is co-author of a new book, Walter Potter’s Curious World of Taxidermy, about the anthropomorphic tableaux of the iconic Victorian taxidermist. The book’s editor at publisher Constable, the aptly named Charlie Mounter, adds, “Consumers are seeking authentic, outsider objets d’art as an antidote to mass production and the inflated values of the marketplace.” On a more prosaic note, Ebenstein adds that another part of its appeal is “simply the grandfather effect, where the trash of the one generation is rediscovered as the treasure of the next”.

This perspective is strengthened by the prevalence of irony in taxidermy’s use, be it in German and Australian boutiques and cafés where poorly done mounts are the decorative focus, or the rise of what is known as “rogue taxidermy”, the creation of imagined animals from real parts, like a griffin or a unicorn. There is also irony, of a more refined sort, present in the squirrel lamps crafted by Alex Randall, an up-and-coming designer, that skitter up hotel walls, and the increasing number of unnatural poses that make viewers all too aware that taxidermy is, after all, just a very specialised sort of upholstery.

But perhaps the strongest argument for taxidermy’s transience is not that we will eventually get accustomed to virtual reality or tired of irony, but that the very centres of taxidermy for decades, the natural history museums, are scaling back, eschewing it for reasons ranging from cost to ethics. Two years ago, a visitor to London could view the Natural History Museum’s tired dioramas framed with signs reading “The Museum is concerned about the conservation of animals in the natural world and no longer collects skins for taxidermy displays”, then walk one kilometre down Brompton Road to Harrods, where the shop windows were full of recently mounted animals, all on loan from Paris boutique Design et Nature. If museums are pulling out of taxidermy, could there be enough one-off displays and creations to sustain it?

New York-based artist Cai Guo-Qiang is certainly doing his bit. One of the trio of major global artists working with taxidermy – along with Damien Hirst and Polly Morgan – Cai opens his first major exhibition in Australia in November at Brisbane’s Gallery of Modern Art, including specially commissioned Heritage, in which 99 life-size animals gather round a watering hole, and the remarkable Head On, which comprises a pack of 99 wolves arcing across the room into a glass barrier and cycling back again.

Cai’s wolves aren’t just any wolves – they have sheep bodies, made up to look like wolves (the hooves are the giveaway) – and Hirst is well known for cleaving his animals in two to powerful effect. But boundary-pushing taxidermy is not restricted to well-established artists. Harriet Horton, 26, of London is making a name for herself by stamping the pelts of some of her specimens with brand logos (like Chanel’s double C pattern) and by inserting cut gemstones into their eyes, which she finds “less macabre” than the normal marbles.

Ultimately it will be Horton’s generation and those younger still who will decide the fate of the art form. Horton says it’s getting more and more expensive to work in London because licensing fees are rising in response to popularity. Ebenstein, who also hosts taxidermy classes at her Morbid Anatomy Library, finds the same is true across the Atlantic, explaining that her courses are “sold out for months, with a 200-plus-person waiting list”. It would be a remarkable transition for taxidermy if the trend continues: from consumer-oriented objects of contemplation to a do-it- yourself craft, where makers embrace the paradoxes with both minds and hands.