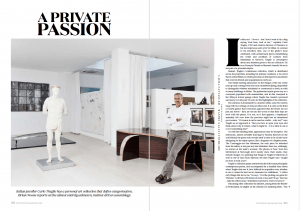 “I collect art – I love it – but I don’t want to fly a flag saying ‘look here, look at me’,” explains Carlo Traglio, CEO and creative director of Vhernier, in his inconspicuous salon privé in Milan. In contrast to his jewellery firm, one of the globe’s most celebrated, with architectural pieces embellishing the wrists and necklines of A-listers from Manhattan to Moscow, Traglio is circumspect about any attention given to his art collection. He is no François Pinault or Bernard Arnault: his art is not part of a personal empire. 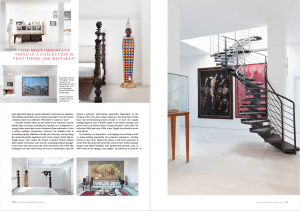 Instead, Traglio’s voluminous collection, which is distributed across his properties, including his primary residence, a two-level flat in central Milan, is wholly personal, an introspective assortment that even his friends and acquaintances rarely see. 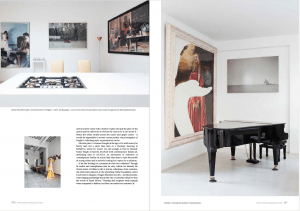 and-coming Porta Nuova in a humble building, impossible to distinguish whether residential or commercial or both, as with so many edifices in the industry-first city. The pedestrian façade gives way to a courtyard populated with automobiles, and in this courtyard is the entrance to the 300sq m former garage where Traglio has created a personal sanctuary over the past 12 years for the highlights of his collection.

The entry is dominated by a massive table, some five metres long with two settings of china at either end. It is only on the third or fourth glance that it becomes apparent that the bowls are not just any bowls – they are set into the wood so that their tops are level with the plates. The assemblage is not, as it first appears, a haphazard leftover from the previous night but an intentional provocation. “Of course it can be used as a table – why not?” says Traglio as we circle it. “But you have to open your eyes and think about why it’s there, what it might be – it is a table to eat at or is it something else?”

As with the building itself, appearances may be deceptive throughout Traglio’s collection. The embryonic, almost invisible drawing by Vanessa Beecroft on the wall behind the green sofa reveals itself in time to be all the more intriguing for its empty spaces, like a fragment of a Sappho poem. The Caravaggio-era San Sebastian, the only piece he inherited from his father, is not just any San Sebastian: there are, strikingly, no arrows in the saint’s wounds. The photos of New York duo McDermott & McGough don’t merely show their studio, they include images of a painting that hangs in Traglio’s bathroom as well as one of Gian Enzo Sperone, the man Traglio says “taught me how to look at art”.

Traglio’s collection spans centuries but the loft houses principally contemporary pieces, each accompanied by a detailed story about when Traglio first saw it, how difficult its acquisition was, whether it can or cannot be lent out to museums for exhibitions. “I collect only things that move me,” he says. “It is like picking out gems for Vhernier: I will have 200 stones in front of me and I’ll say, ‘that one – take the others away.’ Sometimes I just know I have to have it.”

Discussing other collections he admires, among them the Beyeler in Switzerland, he alights on his criterion for analysing them. “The most important thing in a great collection is that there are mistakes. The mistakes mean that you love what you bought. If you don’t have a mistake, there is no collection. Who did it? A curator or you?”

I ask him whether there are any faults in his collection, and he admits there are many, directing my attention to a sculpture by a young Italian artist that is more whimsical than substantive. From a purely aesthetic perspective, however, the mistake here is something entirely different: it is the piece that may end up being the most historically significant and whose creator, Frank Moore, Traglio knew well. Called The Wizard, it depicts French chemist Jean-Claude Chermann, who was the underappreciated manager of the team that discovered the virus associated with AIDS (his colleagues won the Nobel Prize; he was not mentioned), and the picture’s pellucid, Hieronymus Bosch-like illustration of the ravages of the virus sits in stark contrast to the clean lines, subtle hues and inward-facing pieces around it. It does not require multiple glances and it doesn’t speak to an elusive emotion, but gives voice to an ardent vision of a time and place: New York City in the late 1980s and early 1990s, when Traglio lived directly across from Moore.

As a mistake, it is impressive – privileging not monetary value or status-seeking popularity but personal experience. Another picture in the room, behind the piano, is still more personal. It comes from the same time in his life, when in New York he became friends with Julian Schnabel, who painted this portrait, Carlo, in 1998. After all the sittings, says Traglio, “he asked me to hold the canvas and he came with a bucket of glue and put the glue on the canvas and he asked me to elevate the canvas so it ran across it.” Hence the white swathe across the centre and upper corner – it would be impossible to invent a more perfect visual metaphor of Traglio’s collecting style: as personal as can be.

His first piece, a Guttuso bought at the age of 16 with money he barely had, led a short time later to a Hockney drawing at Sotheby’s, where he wasn’t yet old enough to bid for himself. Today Traglio is heavily involved with contemporary Italian art, dedicating time to ACACIA, an association of collectors of contemporary Italian art across Italy that aims to raise the profile of young artists and is actively looking for a space for a museum.

Is he also looking for a museum for his own collection? Though he smiles and reemphasises that he only collects for himself, his chosen home of Milan is full of private collections, from centuries-old aristocratic palazzos to the sprawling new Prada Foundation, and it is not hard to imagine a Traglio Museum one day – an idiosyncratic, wide-ranging assemblage that in this city of catwalks will prove true the words of Frank Moore: “Painting and sculpture seem tranquil when compared to fashion, but they can endure for centuries.”