Japanese whiskies may be younger than their Scottish cousins, but they are no less dynamic or flavourful. Nikka is leading the way, says Brian Noone 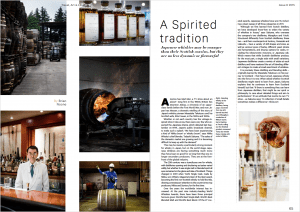 America has Mad Men, a TV show about an advertising firm in the 1960s; Britain has Downton Abbey, a chronicle of an upper-class family before the First World War; and now Japan has Massan, a dramatic retelling of the story of Japan’s whisky pioneer Masataka Taketsuru and his Scottish wife, Rita Cowan, in the 1920s and 1930s.

Whether or not each country has the vintage-inspired show it deserves, there were very few who expected the Japanese drama, which debuted last September on NHK, Japan’s public broadcast channel, to make such a splash. “We have been experiencing a kind of ‘Nikka boom’ or ‘whisky boom’,” says Nikka Whisky’s chief blender, Tadashi Sakuma. “The sales of the domestic market are growing and it is becoming difficult to keep up with the demand.”

This may be merely a particularly strong moment for whisky in Japan, but on the world stage Japanese whiskies are having something much more: they have been so good for so long that they are no longer secondary producers. They are at the forefront of the global industry.

The 20th century was a tumultuous one for whisky, with distilleries opening and shuttering as tastes varied wildly, but whether it was single malt or blended spirit all eyes remained on the glens and isles of Scotland. Things changed in 2001 when Yoichi Single Cask, made by Nikka, won Whisky Magazine’s Best of the Best award, becoming the first non-Scottish whisky to hold the title, drawing connoisseurs’ attention to the country’s two top producers, Nikka and Suntory, for the first time.

Over the years the worldwide interest has in- creased. At the past nine industry-leading World Whiskies Awards, there have been three principal honours given: World’s Best Single Malt, World’s Best Blended Malt and World’s Best Blend. Of the 27 coveted awards, Japanese whiskies have won 16, including a clean sweep of all three categories in 2011.

“Although we first learned from Scotch distillers, we have developed know-how to widen the variety of whiskies in house,” says Sakuma, who oversees the company’s two distilleries, Miyagikyo and Yoichi. Structured differently from Scottish distilleries, these two – and their counterparts at Suntory, Yamazaki and Hakushu – have a variety of still shapes and sizes, as well as various types of barley, different yeast strains and fermentations, and diverse options for casks, including the idiosyncratic mizunara, or Japanese oak. Which means that while Scottish distilleries produce, for the most part, a single style with small variations, Japanese distilleries create a variety of styles at each distillery and have mastered the art of blending different vintages to create a broad assortment of whiskies.

It is precisely these distilling and blending skills – originally learned by Masataka Taketsuru on his journey to Scotland – that have turned Japanese whisky into the force it is now. When asked whether Scottish distilleries might stand to learn from Japan, Sakuma explains that he continues to learn from Scotland himself, but that “if there is something they can learn from Japanese distillers, that might be our spirit or philosophy to care about detailed things and aim to perfectionism.” It’s an attitude that merits its own TV show – as Sakuma says: “A collection of small details sometimes makes a difference.”