London’s classic libation has a few new local venues worthy of its heritage. By Brian Noone 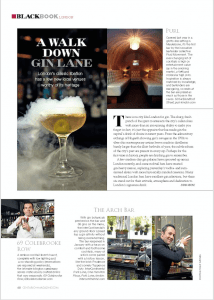 There is no city like London for gin. The sharp, fresh punch of the spirit counteracts the city’s sullen skies with more than its amnesia-inducing powers: in fact, it’s just the opposite that has made gin the capital’s drink of choice in recent years. From the admonitory etchings of Hogarth in the 1700s to uber-chic contemporary artisan brews made in distilleries barely larger than the illicit bathtubs of yore, the subtle echoes of the city’s past are present in every sip. Perhaps for the first time in history, people are drinking gin to remember.

A few modern-day gin palaces have sprouted up across London recently, and some cocktail bars have created gin-heavy menus, replacing yesterday’s vodka- and rum-centred elixirs with more historically minded creations. Many traditional London bars have excellent gin selections, but these six stand out for their attitude, atmosphere and dedication to London’s signature drink.

Opened last year in a grotto-like setting in Marylebone, it’s the first bar by pioneering bartender collective Fluid Movement. The ever-changing list of cocktails is high on entertainment value (as in the smoking martini, at left) and molecular high jinks. Inspiration is always matched by knowledge, and bartenders are easygoing, so seats at the bar are prized as much as those in the caves. 50/54 Blandford Street; purl-london.com

With gin botanicals perched on the bar and 35 gins on the menu, the InterContinental’s airy ground-floor spread has a gin affinity without being overwhelming. The bar reopened in January with a focus on comfort and toothsome cocktails, many of which come paired with a history lesson, like the brisk Prudence and comely Tuppence Duty. InterContinental Park Lane, One Hamilton Place, Park Lane; london.intercontinental.com

Run by Sydneysider Sarah Mitchell, the SoHo bar is infused with both her casual manner and her razor-sharp gin knowledge. The simple decor makes no attempt to reminisce, but the staff can tell you the provenance of phrases like “reading the Riot Act” and “Dutch Courage” without missing a beat. They also know an astonishing amount about each of the 128 gins they stock – most importantly, how best to drink them. Their advice is not limited to the standard drinks, though their options for gin and tonic are truly heroic, with 10 varieties of tonic in stock. There’s no better place in London to delve deep into gin. 4 Golden Square; graphicbar.com

The Art Deco atmosphere here is complemented by the bar’s signature martini cart, which is wheeled to your table to produce a bespoke concoction, matching gin and bitters to your mood. Trust shown in head bartender Agostino Perrone, at left, will not go amiss. More than two dozen gins are visible behind the bar, “but we have more bottles,” says Perrone. “Some very rare, including some not made anymore – those we save for our very discerning clientele. At that point, it’s not about the money. Some bottles just deserve the right lips.” Truer dedication is hard to find. The Connaught, Carlos Place; the-connaught.co.uk

In re-creating an atmospheric Dickensian gin palace of old, all manner of Victoriana has been deployed for the decor, 19th-century recipes have been updated in the kitchen (the food is worth a try) and there is even a standalone dram shop, where drinks are served honesty bar-fashion around a cast-iron bathtub, recalling how the spirit was once made. And rather than the pretentious kitsch this might be, the friendly service and unfailingly superb drinks – often with a molecular twist – make it an inviting place to spend an evening. 63 Worship Street; whistlingshop.com