A growing list of must-visit events and a trio of new galleries are putting London and its most exclusive quarter on the design map. Brian Noone reports 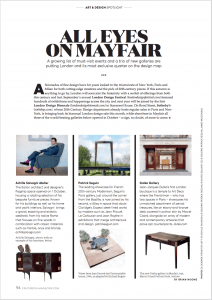 Aficionados of fine design have for years looked to the triumvirate of New York, Paris and Milan for both cutting-edge creations and the pick of 20th-century pieces. If this autumn is anything to go by, London will soon join the fraternity with a surfeit of offerings from both this century and last. September’s annual London Design Festival (londondesignfestival.com) featured hundreds of exhibitions and happenings across the city and next year will be joined by the first London Design Biennale (londondesignbiennale.com) in Somerset House. On Bond Street, Sotheby’s (sothebys.com), whose 20th Century Design department already hosts regular sales in Paris and New York, is bringing back its biannual London design sale this month, while elsewhere in Mayfair all three of the world-beating galleries below opened in October – a sign, no doubt, of more to come.

Achille Salvagni Atelier
The Italian architect and designer’s flagship space opened on 1 October, housing a rotating selection of his bespoke furniture pieces. Known for his buildings as well as his home and yacht interiors, Salvagni brings a grand, exacting and eclectic aesthetic from his native Rome that focuses on fine woods in combination with classic materials such as marble, onyx and bronze. achillesalvagni.com

Patrick Seguin
The leading showcase for French 20th-century Modernism, Seguin’s Paris gallery, just around the corner from the Bastille, is now joined by his second, a 65sq m space that abuts Claridge’s. Expect sleek-lined works by masters such as Jean Prouvé, Le Corbusier and Jean Royère in exhibitions that merge architecture and design. patrickseguin.com

Dutko Gallery
Jean-Jacques Dutko’s first London boutique is a temple to Art Deco where the Frenchman – who has two spaces in Paris – showcases his unmatched assortment of period treasures, like an ebony-and-bronze desk covered in python skin by Marcel Coard, alongside an array of modern and contemporary artworks that prove apt counterpoints. dutko.com