COSMOPOLITAN AND WISTFUL, TRIESTE, HIDDEN IN ITALY’S NORTHEAST CORNER, IS FINALLY RECLAIMING ITS VERVE. BRIAN NOONE REPORTS FROM THE FORMER CAPITAL OF THE AUSTRIAN RIVIERA

IT HAS BECOME FASHIONABLE  to describe European cities as museums, and in this respect Trieste has been at the forefront of the continent for exactly a century: it became a relic instantly in 1918, at the close of World War One, when its raison d’être, the Austro-Hungarian Empire, came crashing to a halt. No longer was it a seaport of global importance or a cosmopolitan crossroads where you might stumble into James Joyce or Stendhal, where Richard Burton translated parts of The Arabian Nights and the Kama Sutra, and where Casanova caroused and, according to his memoirs, found conquests. 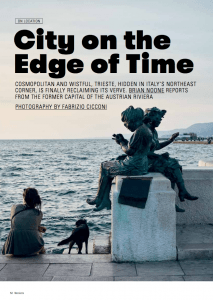 For most of the past hundred years, Trieste has instead been a beguiling repository of – to borrow Joyce’s pun – tristesse. It has almost nothing in common with Venice, that exquisite municipal museum on the opposite coast of the Adriatic, on whom the tides of history have bestowed aristocratic splendour, unerring dignity and hoards of tourists. Trieste is Venice’s younger, haphazard, Germanic cousin, an awkward simulacrum of the original. Its grandest structures are gaudy temples to capitalism; tourists are the oddity rather than the rule; and the prevailing spirit of the place remains a jittery mix of Austrian, Italian, Slovenian and fiercely independent Triestine.

And yet recently the mood of the port city has begun to brighten. Entrepreneurial Italians, both young and young-at-heart, have discovered Trieste, finding that its cheap, imposing buildings have just the kind of spaces that suit expansive workshops and emerging businesses. They are reclaiming the sun-drenched beauty of the Austrian Riviera, as the peninsula from here to Opatija was once known, and catalysing a citywide renewal that remains in its early stages but seems poised for long-term success. 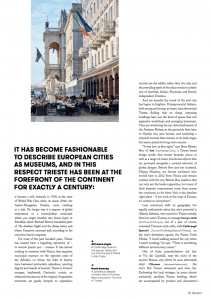 “It was love at first sight,” says Rosa Bittolo Bon of Vud (vud-design.com), a Trieste-based design studio that creates bespoke pieces as well as a range of smart, functional objects that are purveyed alongside a curated selection of global designs. Bittolo Bon and her husband, Filippo Mastinu, are former architects who moved here in 2012 from Venice and remain smitten with the city. Bittolo Bon explains that not only are the locals supportive, but many of their bespoke commissions come from across the continent, so for them “this is the absolute right place – if you look at the map of Europe, it’s central to everywhere”.

Less concerned with its geography but equally enthusiastic about the city’s potential is Alberto Sabatini, who moved to Trieste initially from his native Tuscany to manage Harry’s Grill (duchi.eu/it/harry-s), one of a pair of ornate, oversized Viennese-style cafes, with Caffè degli Specchi (fb.com/CaffedegliSpecchiTrieste), on the city’s showpiece square, the Piazza Unità d’Italia. “I loved walking around the city when I wasn’t working,” he says. “There is something different around every corner.” 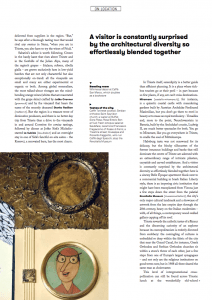 One of these perambulations led him to Via dei Capitelli, near the ruins of the ancient Roman city, where he soon afterwards sited L’Etrusco (etruscotrieste.com), the city’s first Tuscan restaurant and wine bar. Eschewing the local vintages, he pours almost exclusively excellent Tuscan bottling, which are accompanied by produce and charcuterie delivered from suppliers in the region. “But,” he says after a thorough tasting tour that would rival any enoteca in Siena, “when you are in Trieste, you also have to try the wines of Friuli.”

Sabatini’s advice is worth following. Grown in the hardy karst that rises above Trieste and in the foothills of the Julian Alps, many of the region’s grapes – friulano, refosco, ribolla gialla – are grown exclusively here in low-yield batches that are not only characterful but also exceptionally on-trend: all the vineyards are small and many are either experimental or organic or both. Among global sommeliers, the most talked-about vintages are the mind- bending orange wines (whites that are macerated with the grape skins) crafted by Joško Gravner (gravner.it) and by the vineyard that bears the name of the recently deceased Stanko Radikon (radikon.it). But the region is a treasure trove of diminutive producers, and there is no better day trip from Trieste than a drive to the vineyards in and around Cormòns for osmiza tastings, followed by dinner at Joško Sirk’s Michelin- starred La Subida (lasubida.it) and an overnight stay in one of Sirk’s fanciful on-site suites – the Kozovci, a renovated barn, has the most charm. 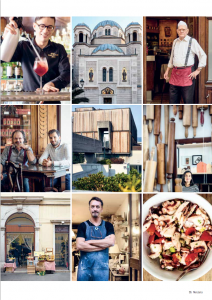 In Trieste itself, serendipity is a better guide than efficient planning. It is a place where tick- box tourists go at their peril – in part because so few places, if any, are can’t-miss destinations. Miramare (castello-miramare.it), for instance, is a quixotic coastal castle with meandering gardens built by Austrian Archduke Ferdinand Maximilian, but you don’t go there to revel in beauty or to muse on royal tomfoolery – Versailles and, more to the point, Neuschwanstein in Bavaria, built by the Archduke’s cousin, Ludwig II, are much better spectacles for both. You go to Miramare, like you go everywhere in Trieste, to cradle the soul of Mitteleuropa.

Habsburg taste was not renowned for its delicacy, but the blocky silhouettes of the former insurance buildings and banks that still dominate the centre of Trieste are adorned with an extraordinary range of intricate pilasters, caryatids and carved entablatures. And a visitor is constantly surprised by the architectural diversity so effortlessly blended together: here is a sinewy Belle Époque apartment block next to a commercial building in brash Italian Liberty style, there is an imposing civic institution that might have been transplanted from Vienna just a few steps down the street from the palatial Revoltella Museum (museorevoltella.it), the city’s only major cultural landmark and a showcase of artwork from the late empire days through the 20th century, heavy on the Italian modernists – with, of all things, a contemporary wood-walled gallery capping off its roof. 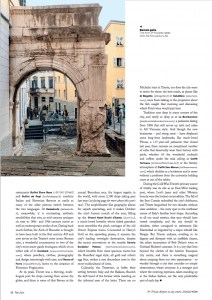 Trieste rewards the catholic tastes of a flâneur and the discerning curiosity of an explorer because its cosmopolitanism is entirely divorced from snobbery: the comingling of cultures is embedded so deep within the fabric of the city that near the Grand Canal, for instance, Greek Orthodox and Serbian Orthodox churches sit within a stone’s throw of each other, just a few steps from one of Europe’s largest synagogues – and not only are the religious institutions on good terms now, but in 1908 all three shared the same man as choirmaster.

This level of intergenerational cross- pollination can still be found across Trieste: lunch at the wonderfully old-school restaurants Buffet Siora Rosa (+39 040 301460) and Buffet da Pepi (buffetdapepi.it) combine Italian and Slovenian flavours as easily as many of the older patrons switch between the two languages. At Katastrofa (katastrofa. it), meanwhile, it is contrasting aesthetic sensibilities that mix, as mid-century antiques sit next to 18th- and 19th-century curios as well as contemporary works of art. Dating back much further, the Arch of Riccardo is thought to have been built in the first century AD and now serves as the Trieste’s most iconic Roman ruin, a wonderful counterpoint to two of the city’s most avant-garde boutiques, which sit on either side of it: Combiné (www.combinetrieste. com), where jewellery, clothes, photography and design intermingle with ease, and Rosso di Ferro (rossodiferro.it), home to the ceramics of Francesco Fragiacomo. 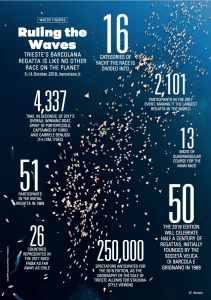 At its peak, Trieste was a thriving, multi- lingual port for ships coming from across the globe, and there is some of that flavour at the annual Barcolana race, the largest regatta in the world, with some 2,100 ships taking part last year (see facing page for more about this year’s race). The amphitheatre-like geography allows for superb spectating, and it makes October the city’s busiest month of the year, filling up the Grand Hotel Duchi d’Aosta (duchi.eu), a much-loved hostelry whose faded grandeur most resembles the plush carriages of the old Orient Express trains. Connected to Harry’s Grill on the sprawling piazza, it remains the city’s leading overnight destination, despite the recent renovations at the seaside Savoia Excelsior Palace (starhotelscollezione.com), which benefits from more spacious rooms but the Russified regal style, all gold and robin’s egg blue, strikes a rare discordant note in this most multicultural of cities.

Culinarily, the Triestines, as befits their setting between Italy and the Balkans, flourish the deft hand of the former while insisting on the informal ease of the latter. There are no Michelin stars in Trieste, nor does the city seem to strive for them: the best meals, at places like Al Bagatto (albagatto.it) or SaluMare (salumare. com), come from talking to the proprietor about the fish caught that morning and discussing which Friuli wine would pair best.

Tradition runs deep in many corners of the city, and rarely as deep as at La Bomboniera (pasticcerialabomboniera.com), a patisserie dating from 1836 that still serves up tarts and cakes in full Viennese style. And though the new businesses – and rising rents – have displaced some long-time landmarks, like much-loved Pirona, a 117-year-old patisserie that closed last year, there remains an exceptional number of cafes that deservedly wear their history with pride, whether it’s the wonderful cocktails and coffees under the teak ceiling at Caffè Torinese (anticocaffetorinese.ts.it) or the literary atmosphere at Caffè San Marco (caffesanmarco. com), which doubles as a bookstore and is never without a professor from the university holding court at one of the tables.

During the Cold War,Trieste’s primary source of vitality was its role as an East-West trading post, where Levi’s jeans and other Western bounty were the hottest commodities. The fall of the Iron Curtain redoubled the city’s doldrums, and Trieste languished for two decades without clear ambition – the rusty spur in the northeast corner of Italy’s familiar boot shape. According to all our usual metrics, that spur should have rusted completely, and the city should be obsolete, either consigned to retirement like Marienbad or reignited by a major rebuild like Skopje. But Trieste endures, revelling in its dignity and disrepair with an ineffable charm, the urban incarnation of Bob Dylan’s voice or Gerhard Richter’s canvases. It is a city that lives beyond the clichés of the historic European city centre, and there is something magical about escaping from our own expectations – to wander through a city that concedes no simple observations, where everyone is a stranger and where the morning espressos, taken standing up in the Italian fashion, are the only predictable part of each day.