Amid a wondrous desert landscape, Tucson is the unsung jewel of the American Southwest, with indulgent residential spas, world- class golf and burgeoning cuisine. By Brian Noone

THERE ARE MORE THAN 300 CLOUD-FREE NIGHTS each year in Tucson, an hour north of the Mexican border in Arizona, and on this particularly velvet-skied evening the Milky Way seems to be swallowing up our hilltop setting. “The moon just glows, doesn’t it,” purrs our stargazer-in-chief, as she leads me to the telescope. As an astronomy agnostic, the sight of the shadows on the moon – the sheer clarity of the rugged lunar terrain – is unexpectedly moving. Suddenly alone with the moon for the first time, I find myself unable to repress a child- like awe.

It’s this sense of otherworldly wonder and displacement, the rewiring of perception, that has long attracted artists – like flower master Georgia O’Keeffe, minimalist Donald Judd and German surrealist Max Ernst – to the supernatural beauty and almost eerie isolation of the American Southwest. And now increasingly, thanks to an expanding roster of creature comforts, sybarites too are opting for a dose of the desert sublime as a way to recentre themselves instead of heading to the more usual serene island paradises or mountaintop eyries.

The arrival in Tucson is majestic from every direction: stark mountain peaks and the cactus-studded hills of a national park ring the city, offering sublime panoramas – and, eventually, hikes – in every direction. But the man-made tapestry of charms is what makes the city unlike any other de-stressing destination in North America. 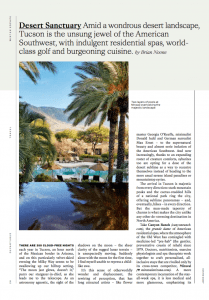 Take Canyon Ranch (canyonranch. com), the grande dame of American residential spas, where the atmosphere of the Old West has comingled with medicine-led “pre-hab” (the gentler, preventative cousin of rehab) since 1979. Doctors, nutritionists, exercise physiologists and spa therapists work together to craft personalised, all- inclusive stays that are rivalled only by its cross-town competitor, Miraval (miravalarizona.com). A more contemporary incarnation of the stay- all-week spa, it is less medical and more glamorous, emphasising its splendid isolation amid the glowing rocky foothills of the Santa Catalina mountains (choose a villa with an unadulterated view), and a favourite retreat for a number of Hollywood A-listers.

Golf was the original raison d’être of Tucson escapists, and there are more golf holes in 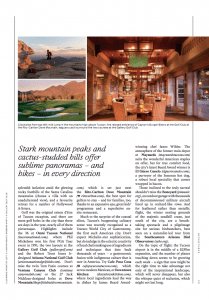 the city than there are days in the year, nearly all of them picturesque. Highlights include the 36 at Omni Tucson National (tucsonnational.com), where Phil Mickelson won his first PGA Tour event in 1991, the two layouts at the Gallery Golf Club (gallerygolf.com) and the Robert Trent Jones Jr- designed Arizona National Golf Club (arizonanationalgolfclub.com). Don’t miss the twin Tom Fazio courses at Ventana Canyon Club (ventana canyonclub.com) or the 27 Jack Nicklaus-designed holes at Dove Mountain(thegolfclubatdovemountain.com), which is set just next the Ritz-Carlton Dove Mountain ( ritzcarlton.com), the best spot for golfers to stay – and for families, too, thanks to an expansive spa, great kids’ programme and a superlative on- site restaurant.

Much to the surprise of the coastal elites, Tucson’s burgeoning culinary scene was recently recognised as a Unesco World City of Gastronomy, the first such American city. Don’t expect Michelin-star sophistication, but do indulge in the eclectic creativity of local chefs making use of ingredients and techniques that date back thousands of years – a gastronomic fusion with indigenous culture that is rare in America. Try Cafe Poca Cosa ( cafepocacosatucson.com), which serves modern Mexican, or Downtown Kitchen (downtownkitchen.com), where local ingredients lead the way in dishes by James Beard Award-winning chef Janos Wilder. The atmosphere of the former train depot at Maynards (maynardstucson.com) suits the wonderful American staples on offer, but for true comfort food, the city’s latest Beard Award winner is El Güero Canelo (elguerocanelo.com), a purveyor of the Sonoran hot dog, a robust local speciality that comes wrapped in bacon.

Those inclined to the truly surreal shouldn’t miss the Boneyard (pimaair. org), an outdoor garage with thousands of decommissioned military aircraft lined up in orchard-like rows. And for feathered rather than metallic flight, the winter nesting grounds of the majestic sandhill crane, just south of the city, are a breath- taking spectacle and a pilgrimage site for serious birdwatchers, best seen on a naturalist-led tour from the Southeastern Arizona Bird Observatory (sabo.org).

On the topic of flight: the Tucson airport is in the middle of a $250m expansion, and the number of planes touching down seems to be growing each week – a sign that now might be the right time to take advantage not only of the inspirational landscape, whichwillneverdisappear,butalso the whisper quiet of seclusion, which might not last long.