The boundary-crossing work of Humans Since 1982 defies comparison. Conceptually complex, technically elegant and aesthetically powerful, their creations remind us of just what it means to create. By Brian Noone 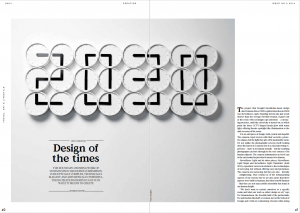 The project that brought Stockholm-based design duo Humans Since 1982 to global attention in 2008 was Surveillance Light. Standing 165cm tall, just a hair shorter than the average Swedish woman, it gazes out at the room with seemingly rapt attention – a menacing presence, until the electricity is turned on, at which point the three CCTV-shaped heads glow with warm light, offering theatre spotlight-like illumination to the dark recesses of the room.

It is an odd piece of design, both cynical and hopeful. The cameras repel viewers with their secretive, protective shapes, but the light they give off is undeniably warm. It’s not unlike the photographic process itself: looking down the barrel of a camera lens is a cold, harrowing experience – there is no human warmth – but the resulting photographs can bore through to the very essence of its human subjects. The camera dehumanises us, but it can in the end remind us just what it means to be human. 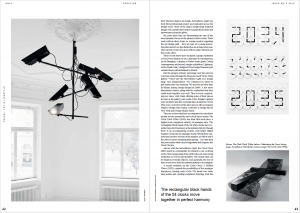 Surveillance Light and its sister pieces, Surveillance Light Single and Surveillance Light Chandelier (both 2011), reposition viewers in relation to the technologies of surveying, but without offering easy interpretations. The cameras are menacing, but they are also – literally – enlightening. They remind us of the dehumanising aspects of our society, but we are also aware that these aspects were built by humans, that they benefit humans – that they are not inaccessible monoliths but stand at our human height.

“We don’t want to restrict ourselves to a specific realm and label our work as either design or art,” says Per Emanuelsson, the Swedish half of the partnership. He and Bastian Bischoff, a German, met at the School of Design and Crafts in Gothenburg, Sweden while doing their Masters degrees in design. Surveillance Light was their first professional project and exploded across the design scene. Most of the major design blogs featured images of it, and the duo’s ticket was punched to fairs and showrooms across the globe. 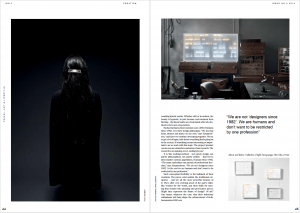 Six years later, they are blossoming into one of the most dynamic forces on the global creative realm. Their work reflects their desire to remain neutral regarding the art/design split – they are part of a young genera- tion that doesn’t see the distinction as an important one. They merely create; it is up to critics to place them in one box or the other.

Their recent shows have included a group exhibition at The Power Station of Art, a museum of contemporary art in Shanghai, a display at Paris’s avant-garde Cutlog contemporary art fair and, a major exhibition, Lightopia, at the Frank Gehry-designed Vitra Design Museum, just outside Basel, which finished in March.

But the group’s primary patronage over the past six years has come through the Brussels-based Victor Hunt gallery. “Victor saw the Surveillance Light on a design blog,” says Emanuelsson. “He contacted us when he just started his own business. We met for the first time in Miami, during Design Miami in 2008.” A few more discussions ensued, along with the realisation that they could work together very well. They’ve been cooperating ever since, with Hunt offering some of their pieces for sale at his gallery, just north of the Belgian capital’s Gare du Midi, and also at design fairs around the world. This year, a selection of the duo’s pieces will accompany Hunt to Design Days Dubai, Collective 2 Design Fair in New York and Design Miami/Basel.

The rave reviews that have accompanied recent shows mostly revolve around the duo’s clock-based works. The Clock Clock White (2010) was their first such piece, a digital clock comprised entirely of analogue ones. The rectangular black hands of the 24 white clocks move together in perfect harmony as the minutes tick by (though there is no accompanying sound), each larger digital number created by six analogue clocks. When these can- not form a perfect version of the number, as with 4 and 9, the effect is more charming than jarring – it is only then that you realise what a feat of ingenuity and elegance the Clock Clock is.

And as with the Surveillance Light, the Clock Clock offers much to contemplate in relation to our evolving world. The repurposing of the old for the new, borrowing aesthetics as well as functionality. The beauty that can be found in everyday objects. And, naturally, the role of time in our lives, from its aestheticisation to its ubiquity.

A recent variation on the Clock Clock, A Million Times (2013), expands the possibilities of the analogue timepieces, turning each of the 576 hands into basic data points and creating sculptural drawings with the resulting kinetic marks. Whether still or in motion, the beauty is hypnotic, in part because each moment feels fleeting – the linear marks are clock hands, after all, des- tined to be in non-stop motion.

Such perpetual action is not just a one-off for Humans Since 1982. It is their design philosophy. “We develop ideas, themes and topics on our own,” says Emanuels- son, “and later we continue developing together. We try to get a lot of input, info about everything that’s going on in the society. If something seems interesting or important to us we work with this topic. The project/product can be seen as a material conclusion of our research. The research is an ongoing, never-ending process.”

It is this working method – not purely design, not purely philosophical, not purely artistic – that led to their studio’s curious appellation, Humans Since 1982. “The name underlines our pursuit of professional freedom,” says Emanuelsson. “We are not ‘designers since 1982’. In the end we are humans and don’t want to be restricted by one profession.”

Such conceptual flexibility is the hallmark of their creations. The pieces exist outside the traditional categories – and are all the more powerful because of it. They offer ever-evolving proof of the pair’s child- like wonder for the world, and their skills for turning that wonder into pleasing and provocative pieces. Might they represent the future of design? Of art? One hopes, whatever the case, that their infectious enthusiasm will help shape the advancement of both.