Have growing numbers of international art fairs overwhelmed the art buying public, or are they just keeping up with demand? Brian Noone investigates

Jazz has Duke Ellington, mountain climbing has Edmund Hillary and the modern art fair has Lorenzo Rudolf. A lawyer by training who began working for the then relatively sedate Art Basel fair in the early 1990s, he transformed the event into a global spectacle, where art and glamour became inextricably intertwined. He followed it up with Art Basel Miami Beach, set emphatically not in New York, the fulcrum of America’s art scene, but halfway to Latin America, in the party capital of the continent. It wasn’t art for art’s sake – not even close – it was art as life, life as art. 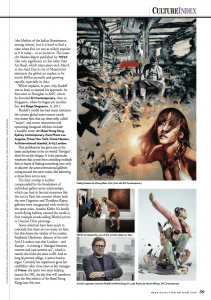 There have been art devotees as far back as there have been professional artists (the Medicis of the Italian Renaissance, among others), but it is hard to find a time when fine art was as widely popular as it is today – or so lucrative. The latest Art Market Report published by TEFAF (the only significant art fair older than Art Basel, which takes place each March in the staid Dutch city of Maastricht) estimates the global art market to be worth $60bn annually and growing rapidly, especially in Asia.

Which explains, in part, why Rudolf was so keen to expand his approach: he first went to Shanghai in 2007, where he founded SH Contemporary, then to Singapore, where he began yet another fair, Art Stage Singapore, in 2011.

This proliferation has given rise to the latest catchphrase in the artworld: “fairtigue”, short for art fair fatigue. It is the particular weariness that comes from attending multiple fairs in hopes of finding something new, only to discover the same international galleries toting around the same works, like following a circus from tent to tent.

The fairs’ overlap is further compounded by the breakdown of individual gallery-artist relationships, which can lead to farcical situations like the one in Paris last autumn where both the new Gagosian and Thaddeus Ropac galleries were inaugurated with works by the same artist, Anselm Kiefer. It’s hardly worth flying halfway around the world to find multiple stands selling Warhol prints or Damien Hirst paintings.

Some observers have been quick to conclude that there are too many art fairs, but this denies the vitality of the market. Stephanie Dieckvoss, director of the new Art13 London, says that London – and Europe – is missing a “dialogue between western and non-western art”, which is exactly the niche she aims to fill. And as long as patrons oblige, it seems hard to argue. Certainly her experience gives her credibility: after three years as fair manager of Frieze, she spent two years helping launch Art HK, the fair that will transform into the first edition of Art Basel Hong Kong later this year.

Such free-flow movement from fair to fair has become commonplace among organisers: Christina Steinbrecher was tempted away from ArtMoscow to Viennafair, which is now the preeminent place to find Central and Eastern European art, and Tim Etchells founded Art HK before moving on to Sydney Contemporary, Melbourne Art Fair, Art13 London and ArtInternational Istanbul. The art scene has truly democratised, there can be little doubt, but it does seem to be fragmenting, with patrons more inclined to go to the nearest fairs, since the galleries seem willing to come to them.

To attract the jet-setting buyers that Rudolf was so keen to impress at Basel, some cities are putting more on offer: Istanbul’s biennial overlaps with Istanbul Contemporary as well as ArtInternational Istanbul. Frieze paired itself with Old Master-centred Frieze Masters in October, which is also when PAD London takes place and many of London’s museums display their premier exhibitions. The capital’s Masterpiece London, on the other hand, a show of fine and decorative arts in Chelsea, has paired itself to the Old Master sales at the major auction houses in late June/early July and the newly formed London Art Week, which consolidates Master Drawings in London and Master Paintings Week London. Paris’s two drawings fairs of worldwide significance, Salon du Dessin and Drawing Now, similarly overlap almost entirely in mid-April.

Is all this too much for the global art community? Evidently not, since both gallerists and fair organisers say attendance is up across the board. And, after all, there are worse things than an art-loving public.