The hidden depths of the art world can offer surprises – both good and bad – for those who dare to probe them. Brian Noone meets some trustworthy experts who help guide the way 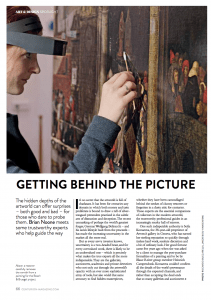 It’s no secret that the art world is full of charlatans. It has been for centuries: any domain in which both money and taste proliferate is bound to draw a raft of silver- tongued pretenders practised in the subtle arts of distraction and deception. The recent unmasking of perhaps the world’s greatest forger, German Wolfgang Beltracchi – and his lavish lifestyle built from the proceeds – has made the increasing uncertainty in the market all the more real.

But as every savvy investor knows, uncertainty is a two-headed beast, and for every overvalued work, there is likely to be an undervalued one – which is precisely what makes the true experts all the more indispensable. They are the gallerists, auctioneers, academics and private detectives who not only cut through the art world’s opacity with an ever more sophisticated array of tools, but also wield that same armoury to find hidden masterpieces, whether they have been camouflaged behind the strokes of clumsy restorers or forgotten in a dusty attic for centuries. These experts are the essential companions of collectors in the modern art world, the trustworthy professional guides in an increasingly murky hall of mirrors. 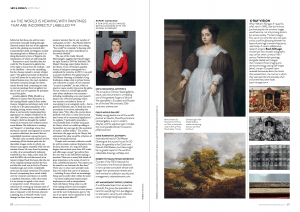 One such indisputable authority is Sofia Komarova, the 38-year-old proprietor of Artvera’s gallery in Geneva, who has earned her sterling reputation so quickly through tireless hard work, resolute discretion and a bit of ordinary luck. Her good fortune came five years ago when she was asked by a client to manage the post-purchase formalities of a painting said to be by Blaue Reiter group member Heinrich Campendonk. Komarova couldn’t confirm all the details of the work’s provenance through the expected channels, and rather than accepting the dead ends that so many gallerists and auctioneers before her had done, she and her team persevered, eventually finding through chemical analysis that one of the pigments used in the painting was invented after Campendonk’s death. Investigators tracked the painting back to Beltracchi, and in so doing discovered a trove of forgeries the ramifications of which are still being felt.

Komarova is much humbler than she could be. The Russia-born gallerist has every right to shout from the rooftops – and in the headlines – about the unmasking, but she chooses instead to remain whisper quiet:“The gallery’s principle of discretion is and will always be its main focus,” she says. Indeed, business since the case’s resolution has barely increased, though her clients remain fiercely loyal, continuing not only to procure paintings from her gallery but also to seek out her expertise for purchases around the globe.

London gallerist Philip Mould is as different in manner from Komarova as the buzzing British capital is from sedate Geneva. Gregarious and always ready with a smile, he is the great populariser of art sleuthing, having written several books about it, and recently transitioning from appearances on Antiques Roadshow to his own BBC television series called Fake or Fortune?, which has brought the rarefied world of art research into ordinary homes across Britain. His dedication to seeking out “sleepers”, or paintings whose true attribution remains unrecognised in auctions or private collections, has earned him an unparalleled reputation among his peers.

Mould’s most successful method involves examining off-the-beaten-path sales for discordant images, works in which one element may appear masterful while the rest remains clumsy. He once found a painting on eBay of an extraordinarily delicately rendered face but a drab, coarse body. He took the $200 risk and discovered, as his restorer stripped back the layers, that the rest of the original painting matched the face, and that the work was, in fact, by Thomas Gainsborough and worth considerably more than his initial investment. The reasons for such overpainting have varied widely over the centuries: sometimes it is merely a maladroit restoration, while other times it is an attempt to appeal to the owner or prospective owner. (Victorians were notorious for covering up intimate areas of the nude.) Occasionally, the accumulation of dust or exposure to the elements obscures a painting, but, in Mould’s words, “more damage has been done to pictures by amateur restorers than by any number of earthquakes or fires”. And Mould believes he has barely made a chip in the iceberg: “the world,” he contends, “is heaving with paintings that are either unattributed or incorrectly labelled.”

The case of the Castle Howard Michelangelo suggests that Mould might be right. Found in 2000 by Sotheby’s Old Master Drawings expert Julien Stock in the library of one of Europe’s grandest homes, it had gone unrecognised in a scrapbook for centuries. In 2001 it was sold at auction for $8.4m.The global head of Old Master Drawings at Sotheby’s, Greg Rubinstein, makes visits to private homes and collections in search of such treasures “as much as possible”, he says, which in practice means weekly trips across the globe. He has worked on several high-profile cases where attribution was uncertain – including coordinating a ten-year research project into a Vermeer painting, which was recently concluded in favour of reaccepting it as an autograph work – but in general, Rubinstein says, he finds that most uncertainty is not about authorship but about value. “Very often, the owners know perfectly well what it is they have, but just aren’t aware of its commercial significance,” he explains. “I particularly remember a very beautiful sheet of studies by Jacques de Gheyn, which we ended up selling in Amsterdam ten years ago for the equivalent of nearly a million dollars.” The owner, who knew the page was by de Gheyn, had anticipated the value would be a fraction of what it eventually fetched.

Despite such successes, collectors would do well to remain cautious. Komarova cites the June discovery of a ring of Russian forgers that involved more than 400 works, and offers sage counsel:“get advice from the very best in the field before making a purchase. There are so many little details of great importance to be aware of, and it is truly a professional practice. Not anyone can be trained to see between the fine lines.” There are, it is true, more scientific tools than ever before that can be of assistance – including X-rays, which are increasingly being used to probe deep within the paint – but those implements require proper deployment as well as interpretation. And with history being what it is, rife with missing archives and incomplete documentation, sometimes not even science can tell for sure. As Komarova puts it, “the eye of an expert can be trained, but it will always stay human after all”.

X-ray Vision
When Wilhelm Röntgen X-rayed his wife’s hand in 1895, little did he know just how popular the uncanny images would become, not only among doctors but across society. the technology’s first use on art came the very next year, and as a tool for glimpsing beneath the layers of paintings it remains frequently used today. A recent collaborative research project, Bosch & Bruegel, showed just how valuable radiographic rays can be: when turned on 16th- century Netherlandish paintings, alongside related technologies that included infrared imaging and dendrochronology dating (see images below), the pan-European team revealed discoveries about the hands that painted them, the manner in which they were painted and precisely when and where they were made.