From Hong Kong to Beirut to Cape Town to Manhattan, the art world’s borderless ambitions are finally being realised. Brian Noone looks back at the developments at auction houses and galleries over the previous year to see what 2018 might hold

After a beleaguered 18 months, the art world is staggering back to normalcy. Headlining events in early autumn – Frieze in London and FIAC in Paris – saw moderate sales, while auction- house totals for the first half of 2017 grew 5.3% year- on-year, according to Art Price, and included the blockbuster $110.5m Basquiat, which reassured many that the top end of the market for contemporary art remains robust – a notion that was confirmed in November when Leonardo da Vinci’s Salvator Mundi sold for a record $450.3m. 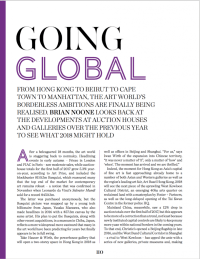 The latter was purchased anonymously, but the Basquiat picture was snapped up by a young tech billionaire from Japan, Yusaku Maezawa, who also made headlines in 2016 with a $57.3m canvas by the same artist. His plan to put the Basquiats, along with other recent acquisitions, in a museum in Chiba, Japan, reflects a more widespread move eastward that many in the art world have been predicting for years but finally appears to be in full swing.

Take Hauser & Wirth, the powerhouse gallery that will open a two-storey space in Hong Kong in 2018 as well as offices in Beijing and Shanghai. “For us,” says Iwan Wirth of the expansion into Chinese territory, “it was never a matter of ‘if’, only a matter of ‘how’ and ‘when’. The moment has arrived and we are thrilled.” 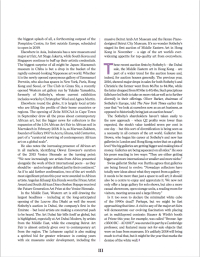 Indeed, the moment for Hong Kong as Asia’s capital of fine art is fast approaching: already home to a number of both Asian and Western galleries as well as the region’s leading art fair, Art Basel Hong Kong, 2018 will see the next piece of the sprawling West Kowloon Cultural District, an emerging 40ha arts quarter on reclaimed land with a masterplan by Foster + Partners, as well as the long-delayed opening of the Tai Kwun Centre in the former police HQ.

Mainland China, meanwhile, saw a 12% drop in auction totals over the first half of 2017, but this appears to be more of a correction than a trend, not least because newly instituted capital controls are likely to keep many more yuan within national borders in the coming years. To that end, Christie’s opened a Beijing flagship in late 2016, and the West Bund Cultural Corridor in Shanghai – a rival to West Kowloon – has upped the ante with a series of new galleries, private museums and, making the biggest splash of all, a forthcoming outpost of the Pompidou Centre, its first outside Europe, scheduled to open in 2019.

Elsewhere in Asia, Indonesia has a new museum and major art fair, Art Stage Jakarta, while South Korea and Singapore continue to buff up their artistic credentials. The biggest surprise of all might be Japan: Maezawa’s museum in Chiba is but a drop in the bucket of the rapidly outward-looking Nipponese art world. Whether it is the newly opened eponymous gallery of Emmanuel Perrotin, who also has spaces in New York, Paris, Hong Kong and Seoul, or The Club in Ginza Six, a recently opened Western art gallery run by Yukako Yamashita, formerly of Sotheby’s, whose current exhibition includes works by Christopher Wool and Agnes Martin.

Elsewhere round the globe, it is largely local artists who are lifting the profile of their home countries or regions. The opening of Zeitz MOCAA in Cape Town in September drew all the press about contemporary African art, but the bigger news for collectors is the expansion of the 1:54 African Art Fair to African soil in Marrakech in February 2018. It is, as Marwan Zakhem, founder of Gallery 1957 in Accra, Ghana, told Centurion, part of a “curatorial rewiring of contemporary African art on a global scale”.

He also notes the increasing presence of African art in all markets, identifying Okwui Enwezor’s curation of the 2015 Venice Biennale as the turning point: “We now increasingly see artists from Africa presented alongside the work of their international peers – as they should be – and no longer defined just by their continent.” As if to add further confirmation, two of the art world’s most significant prizes this year were awarded to African artists: Angolan Kiluanji Kia Henda won the Frieze Artist Award and South African Dineo Seshee Bopape received the Future Generation Art Prize at the Venice Biennale.

In the Middle East, Western art is still drawing the largest headlines – including at the long-anticipated opening of the Louvre Abu Dhabi as well the recent Sotheby’s auction in Dubai, the company’s first in the Emirate – but local artists are making a concerted push to be heard. The Art Dubai fair bills itself as global, but is highlighted, especially at Art Dubai Modern, by artists from the Middle East, while the emerging Beirut Art Fair is almost entirely given over to contemporary art from the region. The Lebanese capital is also making a spirited bid for greater relevance in coming years with six museums under development, including the massive Beirut Arab Art Museum and the Renzo Piano- designed Beirut City Museum. It’s no wonder Sotheby’s staged its first auction of Middle Eastern Art in Hong Kong in November – a sign of the art world’s ever- widening appetite for top-quality art from everywhere.

These recent auction firsts by Sotheby’s – the Dubai sale, the Middle Eastern art in Hong Kong – are part of a wider trend for the auction house and, indeed, for auction houses generally. The previous year, 2016, showed major drops in sales for both Sotheby’s and Christie’s: the former went from $6.7bn to $4.9bn, while the latter dropped from $7.4bn to $5.4bn. Such precipitous falls have led both to take on more risk as well as to further diversify in their offerings. Oliver Barker, chairman of Sotheby’s Europe, told The New York Times earlier this year that “we look at ourselves now as an art business, as opposed to historically being just an auction house”.

The Sotheby’s shareholders haven’t taken easily to the new approach – when Q2 profits were lower than expected, the stock’s value tumbled seven per cent in one day – but this sort of diversification is being seen as a necessity in all corners of the art world. Gallerist Ben Brown, who began his career at Sotheby’s and now has galleries in London and Hong Kong, notes that on a global level “the big galleries are getting bigger and making lots of money. Galleries are being squeezed on all sides.” He sees his peers reacting in two ways: “They are either getting bigger and more international or smaller and more niche.”

Swiss gallerist Stefan von Bartha agrees that galleries are being forced to evolve: “Nowadays collectors have totally new ideas about what they expect from a gallery – it needs to be more than just a space to sell art; it should also be a centre to enjoy and appreciate it. We now not only offer a large gallery for solo shows, but also a more casual showroom, open storage units, a reading room for visitors, meeting areas and a large library.”

Is it too soon to declare the minimalist white cube of the 1990s dead? Perhaps, but we might be fast approaching that time. A visit to any of the major art fairs will demonstrate our evolving fascination with placing art in multilayered contexts: Hauser & Wirth’s booth at Frieze this year, for example, was called “Bronze Age c3500 BC – AD 2017”, was curated in part by a Cambridge professor, and featured many not-for-sale objects that were on loan from museums. It’s unlikely 2018 will bring much to rival that, but it might be the year that marks the demise of the white wall.