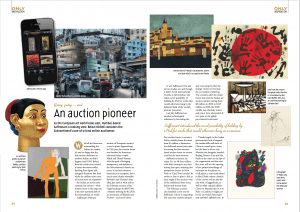 With all the buzz now surrounding the Indian art market, it’s easy to forget that the first auction dedicated to modern Indian art didn’t happen until 1995. Before then the works were treated as mere decorative trifles, fetching four-figure bids alongside furniture lots.And while the million-euro sums of recent years are impressive – the Indian art scene most certainly has arrived – what matters more in the long run is the slow eastward shift of the international art world.

Saffronart’s February auction of European works is a case in point. Approaching its 12th year, the auction house was founded by American-educated Indian couple Minal and Dinesh Vazirani with the goal of bringing transparency and stability to the Subcontinent’s chaotic art scene. It has been internet- based since its inception, but it much more closely resembles Sotheby’s and Christie’s than eBay. Just look at what sold at the February auction: a Van Gogh landscape for $697,000, a Matisse drawing for $12,420, an assortment of Warhols and Picassos, as well as much more.

It was Saffronart’s first sale of non-Indian art, and though it didn’t break international records, it did introduce the rather novel possibility of bidding by iPad for works that would otherwise hang in the hallowed halls of the world’s premier museums.

Saffronart auctions are either 24- or 48-hour affairs, with bids coming at any time during that span, meaning that prospective buyers in New York or Cape Town needn’t be awake at 3am to place a bid, as they might if the auction were of the traditional three-hour, bricks-and-mortar kind.

The February auction also heralded a new era for Saffronart, which is expanding this year into carpets, antiques and property. But the change comes not because the art market is faltering.To the contrary, after the initial boom that sent the Indian art auction market soaring from $5 million in 2003 to $145 million in 2006, the 2009 tumble was relatively minor and prices have rebounded, if not quite to the giddy, pre- financial crisis state.

Thanks largely to the Indian government’s lack of support, the market falls well short of China in overall price terms, but the buzz is all too real. Mumbai sits alongside Istanbul, Beijing, Mexico City and São Paulo as the cities on the lips of the cognoscenti, and the next few years will see the opening of the greatest assemblage of museums on the planet on, of all places, a man-made island in Abu Dhabi, where a branch of the Louvre will sit side-by- side with a Guggenheim, as well as other cultural edifices. Closer to Mumbai than it is to Paris or London, it might just be the art world’s first major step eastward. saffronart.com