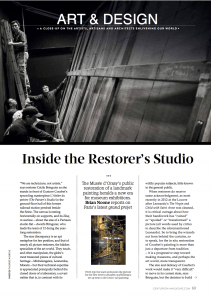 technicians, not artists,” says restorer Cécile Bringuier as she stands in front of Gustave Courbet’s sprawling masterpiece L’Atelier du peintre (The Painter’s Studio) in the ground floor hall of the Beaux Arts-era railway station perched beside  the Seine. The canvas is resting horizontally on supports, and its 22sq m surface – about the size of a Parisian studio flat – dwarves Bringuier, who leads the team of 12 doing the year-long restoration.

The size discrepancy is an apt metaphor for her position, and that of nearly all picture restorers, the hidden specialists of the art world. They touch, and often manipulate, the globe’s  most treasured pieces of cultural heritage – Michelangelos, Leonardos, Monets – but their technical expertise is appreciated principally behind the closed doors of a laboratory, a covert metier that is, in contrast with its wildly popular subjects, little known to the general public. 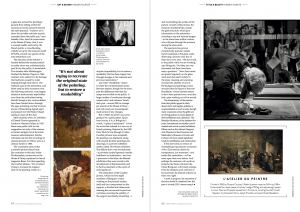 When restorers do receive  some acknowledgement, as most recently in 2012 at the Louvre  after Leonardo’s The Virgin and Child with Saint Anne was cleaned, it is critical outrage about how their handiwork has “ruined” or “spoiled” or “transformed” a picture (all words used by critics to describe the aforementioned Leonardo). So to bring the wizards out from behind the curtains, so  to speak, for the in situ restoration of Courbet’s painting is more than just a departure from tradition  – it is a progressive step toward making museums, and perhaps the art world, more transparent.

The size and delicacy of Courbet’s work would make it “very difficult” to move in its current state, says Bringuier, but the decision to build  a glass box around the painting’s ground-floor setting within the museum involved concerns beyond the mere practical. “It allows us to show the invisible activities usually concealed from the public eye,” says Isabelle Cahn, head of conservation at the Musée d’Orsay. And it was a concept readily received by the French public: a crowdfunding website set up by the museum raised €155,374, around one quarter of the total restoration cost.

The elevation of the restorer’s humble behind-the-scenes position to reality show star, readily paid for by the public, is remarkable. Five decades after Michelangelo finished the Sistine Chapel, in 1565, restorers were called in to fix damage that had been done by water seeping through from above. The methods used in  the restoration, and those used by their successors over the following centuries, were largely treated as trade secrets, kept hidden even  from the authorities footing the bill, though a few curious details have been handed down through the ages, including one that involves loaves of bread being ripped apart and passed over the Sistine Chapel ceiling to clean off the dust.

More recently, when An Exhibition of Cleaned Pictures appeared in London’s National Gallery in 1947, there were public calls for the resignation not only of the restorer, a German émigré, but of the entire museum administration. Similar criticisms had met the unveilings of cleaned pictures in 1936 as well as a century earlier in 1846.

The uncertainty about what  a restored picture should look  like continues to this day. Isolde Pludermacher, conservator at the Musée d’Orsay, explained to French magazine Beaux Arts that regarding the Courbet tableau, “It’s not about trying to recreate the original state  of the painting, which is a utopian impossibility, but to restore a readability that has been largely lost through changes in the materials and previous restorations.”

Just what “readability” means  is where the contentiousness exists between experts, though for the most part the differences between the camps are invisible to the public. A large number of works pass through conservators’ and restorers’ hands – around 500 on average per annum at the Musée d’Orsay – and only rarely are museumgoers made aware of any changes.

But L’Atelier du peintre was never going to be a quiet project. Apart from its size, it is, in Bringuier’s words, “a piece of patrimony”. It was the work that ushered in a new era of French painting. Rejected by the 1855 Paris World’s Fair (though 11 other Courbet pictures were accepted), the painting was displayed, along with around 40 other paintings and drawings, in a private exhibition nearby called The Pavilion of Realism. The defiant show was revolutionary – a privately funded spectacle outside of traditional art institutions – and was a precursor to the Salon des Refusés exhibitions that were crucial to the development of Impressionism and to Paris’s place at the centre of avant-garde art.

The restoration of the Courbet picture, which involves eight members of Bringuier’s team working on the pictorial surface itself and four concentrated on the support, is divided into three parts: cleaning the canvas and its previous varnishes, ensuring the solidity of the support and finally retouching and revarnishing the surface of the picture. As part of the process, the museum installed iPads outside the glass structure, which give information on the restoration – including x-ray and infrared images – to the some three million visitors who will pass through the museum during the renovation.

The spectacle has proven exceptionally popular: people  stand transfixed at the glass walls, observing a process very few of them have ever seen. “We don’t talk to  the public while we are working,” says Bringuier, “but they are very interested and there have been many questions.” New discoveries are posted regularly on the glass walls and discussed widely in the press: cleaning and scanning revealed the identity of one of the background paintings; it also revealed that the figure of the poet Baudelaire, whose mistress seems to have been painted over, once also had a pipe sticking out of his mouth.

The transparency of the process, from first public appeal to daily observation and regular updates, is unprecedented on such a scale, though many museums across the globe are involving patrons to some degree in their exhibitions and collections. The Brooklyn Museum, at the forefront for years, has featured an entirely crowd-created and crowd-curated exhibition. Others such as the African Diaspora Arts Museum in 2013 and New York’s Museum of Comic and Cartoon Art have raised significant funds from the public for exhibitions and construction.

If this 21st-century version of charitable giving remains connected with a 21st-century desire for transparency, our museums – and trades like restoration – will be more open than ever before. And perhaps the restorers who work on projects like these, restorers like Cécile Bringuier, will finally emerge from the shadows and, contrary to her assertion, be deemed artisans in their own right.

Finished in 1855 by Gustave Courbet, L’Atelier du peintre measures 3.61m by 5.98m. Constructed from seven pieces of canvas, it weighs 350 kilograms and requires eight people to move. There are 31 people represented in the picture, including Courbet himself, Napoleon III, philosopher Pierre-Joseph Proudhon and poet Charles Baudelaire.