The lithe, sensuous designs of Joseph Walsh are blurring the lines between art and design. BRIAN NOONE reports

Joseph Walsh is a master illusionist, but he would never describe himself that way. He prefers to be called a designer or a maker, humbler titles that are more reflective of the bucolic Irish farmland, half an hour south of Cork, where his eponymous studio is set. 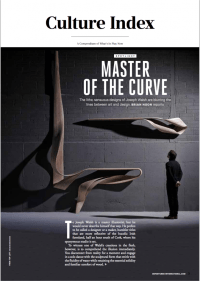 To witness one of Walsh’s creations in the flesh, however, is to comprehend the illusion immediately. You disconnect from reality for a moment and engage in a solo dance with the sculptural form that swirls with the fluidity of water while retaining the grounded solidity and familiar comfort of wood.

The conceptual confusion runs deep: you don’t know whether to let yourself float away into reveries of awe or to engage scepticism at the deepest level. Is this real? How did he do it? There must be a hidden secret.

There is indeed a hidden secret that involves thin layers of wood, allowing Walsh and his team of 17 to craft the curvilinear creations in styles – and scales – that are entirely unique. But Walsh, who has no formal design training, explains the singularity in his approach this way: “Rather than resolving something on paper or on CAD and then crafting it, we have changed the process,” he explains. 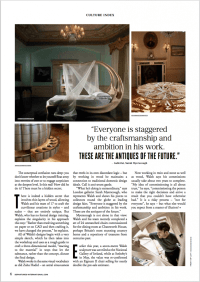 All of Walsh’s designs begin with a simple sketch, which he then takes into the workshop and uses as a rough guide to craft a three-dimensional model, “reacting to the material” in ways that let the substance, rather than the concept, dictate the final design.

Walsh works in the same visual vocabulary as did Zaha Hadid – an astral sinuousness that revels in its own discordant logic – but by working in wood he maintains a connection to traditional domestic design ideals. Call it anti-avant garde.

“What he’s doing is extraordinary,” says London gallerist Sarah Myerscough, who represents Walsh and shows his pieces to collectors round the globe at leading design fairs. “Everyone is staggered by the craftsmanship and ambition in his work. These are the antiques of the future.”

Myerscough is not alone in that view: Walsh and his team recently completed a set of 24 unmatched chairs commissioned for the dining room at Chatsworth House, perhaps Britain’s most stunning country home and a repository of treasures from centuries past.

Earlier this year, a seven-metre Walsh sculpture was unveiled at the National Gallery of Ireland, while at Sotheby’s in May, the ascending value was re-confirmed with an Eignum II chair selling for nearly double the pre-sale estimate.

Now working in resin and stone as well as wood, Walsh says his commissions usually take about two years to complete. “My idea of commissioning is all about trust,” he says, “commissioning the person to make the right decisions and arrive a result that you couldn’t have otherwise had.” It is a risky process – “not for everyone”, he cautions – but what else would you expect from a master of illusion?