A once-in-a-generation exhibition comes to Monaco this summer, 40 years after the artist’s death, thanks to a public display by the intensely private Nahmad family. By Brian Noone 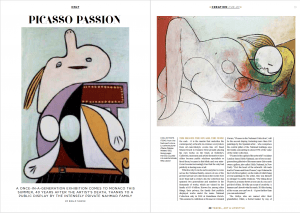 The bigger the splash, The more the cash – it is the maxim that underlies the contemporary art world, in evidence everywhere from art-cum-lifestyle events like Art Basel Miami Beach to Damien Hirst proudly placing his own works on the block at Sotheby’s. Gallerists, museums and artists themselves have either become public relations specialists or hired them, because in this blink-and-you-miss- it era it seems increasingly true that the only bad publicity is having none at all. 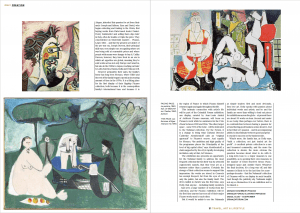 Which is why it can be such a surprise to come across the Nahmad family, owners of one of the premier private art collections in the world. Now more than half a century old, the collection has spanned two generations and numbers in the thousands of works, which are valued by the family at $3-4 billion. Known for, among other things, their privacy, the family first publicly displayed works under the name Nahmad Collection only in 2011 at Kunsthaus Zurich. This summer’s exhibition at Monaco’s Grimaldi

Forum, “Picasso in the Nahmad Collection”, will be the second display, featuring more than 100 paintings by the Spanish artist – who comprises the central pillar of the Nahmad holdings, says the family, amounting to about 70% of the value of the entire collection.

“Picasso is the capital of the artworld!” exclaims London-based Helly Nahmad, one of two second- generation gallerists of the same name (his cousin owns a gallery, also called Helly Nahmad, in New York). “He’s the heart of the artworld. All roads lead to Picasso and from Picasso,” says Nahmad in his Cork Street gallery, on the walls of which hang several paintings by the artist, who was himself no stranger to public relations. “The thing about Picasso is, as many shows as you can do, you can’t get tired of him. He’s like an ocean of creativity. A human can’t absorb what he made. It’s like staring at the ocean: you can’t see it – it goes farther than you can understand.”

The Hellys, who are named after their grandfather, Hillel, a Beirut banker by way of Aleppo, inherited this passion for art from their uncle Joseph and fathers, Ezra and David, who began collecting and trading in the 1960s, first buying works from Paris-based dealer Daniel- Henry Kahnweiler and selling them days later in Italy, often for double or triple the price. They concentrated on Modernist masters – Picasso, Léger, Miró – and like the greatest art dealer of the pre-war era, Joseph Duveen, their principal skill was a very simple one: recognising where art was being sold at reasonable prices and where people with means were hungry to buy it. Unlike Duveen, however, they have lived in an era in which art appetites are global, meaning they’ve sold works across not only Europe and America, but also in the 1980s to Japan, reaching out later to Latin America, Russia, India and China as well.

However peripatetic their sales, the family’s home has long been Monaco, where Hillel and the rest of the family began to spend an increasing amount of time in the 1970s. It is a fitting place for the first display of their flagship Picasso collection, both because it is the cosmopolitan family’s international base and because it is the region of France to which Picasso himself returned again and again throughout his life.

This intimate connection with artist’s life will be part of the Grimaldi Forum exhibition: one display, curated by Jean-Louis Andral of Antibes’s Picasso museum, will focus on Picasso’s work while he summered in the Côte d’Azur between 1920 and 1946. The other, larger space – some 75% of the total – will be dedicated to the Nahmad collection. For the Forum, it is a change to bring what Cultural Director Catherine Alestchenkoff calls an “original approach” to Picasso’s oeuvre. And equally for Monaco, “the ambition and high quality of the programme places the Principality at the level of big capital cities,” says Alestchenkoff, a claim supported by the city’s rapidly developing invitation-only art fair, Art Monaco.

The exhibition also presents an opportunity for the Nahmad family to address the most frequent criticism thrown their way by artworld cognoscenti: namely, that they treat art as a business rather than a passion. Certainly the storage of their collection seems to support this impression: the works are stored in Geneva’s tax-exempt freeport, far from the eyes of not only the public, but also the family itself. The 2011 exhibit in Zurich was the first time, says Helly, that anyone – including family members – had seen a large number of works from the collection, and the Picasso exhibition will be the first time anyone has seen all of their major Picasso works next to each other.

But it would be unfair to see the Nahmads as simple traders: first and most obviously, they love art. Helly speaks with passion about individual works and artists, and he and the family are more than willing to lend out pieces for exhibitions across the globe – at present there are about 50 works on loan. Second and easier to see today than perhaps ever before, there is no contradiction between having a passion for art and having good business sense about it. And in fact that very passion – and its accompanying ability to discriminate between good and great – is crucial to success on the business side.

What’s more, the family has, as Helly says, “built a collection, not just traded art for profit”. A excellent private collection is a rare and treasured commodity, and the more the collection is shown, the more obvious the question becomes about what to do with it: a long-term loan to a major museum is one possibility, as is opening their own museum, in the manner of Ernst Beyeler’s Renzo Piano- designed space just outside Basel. Whatever the final decision, it’s a long way off, and this summer is likely to be the last time for years – perhaps decades – that the Nahmads’ collection of Picassos will be on display in such breadth. And though the publicity-shy Nahmads might not say so themselves: it is an exhibition not to be missed.