Buoyant, boisterous and slightly worried about a contemporary art bubble, the art world has never been more global – or more commoditised – as it looks toward 2016, says Brian Noone 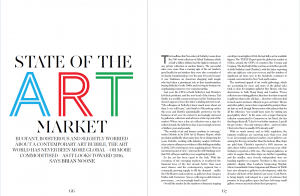 The headlines this November at Sotheby’s came from the 500-work collection of Alfred Taubman, which at half a billion dollars had the highest estimate of any private collection in auction history. The successful sales were more than a rousing sign of the art market’s good health for art insiders: they were also a reminder of its drastic transformation over the past 30 years because it was Taubman, an American shopping mall mogul, who had taken a prominent role in that transformation, buying Sotheby’s in the 1980s and reviving its fortunes by emphasising commerce over connoisseurship. 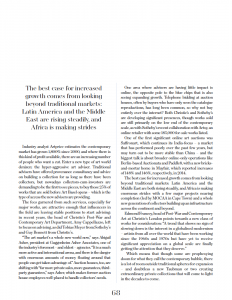 Last year, the CEOs of both Sotheby’s and Christie’s left their positions, and the new head of the former, Tad Smith, is a worldly commercial success like Taubman but doesn’t appear to have the latter’s abiding interest in art. “My colleagues at Sotheby’s know much more about art than I ever will learn,” said Smith to Bloomberg earlier this year, and Smith’s unmistakable preference for the business of art over its content is increasingly mirrored by gallerists, collectors and advisers at the top end of the market. Where once a fine art collection was a sign of a cultured mind, the talk these days is increasingly in terms of dollars, yuan and pounds.

“The worlds of art and finance continue to converge,” writes Deloitte in its 2014 Art & Finance Report, which proclaims publically what many have been whispering for years. Deloitte, working with industry analyst ArtTactic, cites a survey of buyers as evidence of the shifting mentality: in 2012, 53% of art buyers were acquiring pieces “from an investment point of view”, whereas the 2014 findings were that 76% of buyers said they were acquiring for profit.

So far, art has been equal to the task. With the exception of the emerging markets, it weathered the financial lows of the last decade better than most asset classes, and the contemporary segment has a constantly growing supply to fill the demand – unlike the Old Masters and moderns, as gallerist Jean-Jacques Dutko told Centurion, “pieces with impeccable historic provenance … are increasingly hard to find”.

Overall the market by the numbers is buoyant, topping out all previous highs in 2014, the last full year for available figures. The TEFAF Report puts the global art market at €51bn, around the GDPs of countries like Croatia and Uruguay. The first half of this year has seen further growth at both Sotheby’s and Christie’s, with the latter reporting sales up eight per cent year-on-year, and the number of significant art fairs, now in the hundreds, continues to expand, concentrated in New York and London.

The newfound appeal of art world gatherings, which are accounting for more and more of the global sales total, is clear for longtime gallerist Ben Brown, who has showrooms in both Hong Kong and London: “Fewer collectors are visiting galleries; they have less time to spend in galleries than in the old days … therefore collectors find it much easier and more efficient to go to art fairs.” Brown and other gallery owners have responded by going to those art fairs as well, though Brown notes with sadness that for all the efficiency “you would learn more by visiting any good gallery show”. In the same vein, a major European collector commented to Centurion on Art Basel, the fair that began them all: “I don’t even bother anymore. I get all the pre-invites – the early entrance offers – and even when I first enter there is usually 25% already sold.”

With so much money and so little regulation, the industry traditions are wavering more than ever. And in an increasingly polarised market, most galleries are aiming for the top end rather than the bottom. Blue chips are gold dust: Christie’s reported a 48% increase on sales above $10m compared to the previous year, while Sotheby’s reported a 20% rise. The largest galleries, in order to acquire these blue chips, are further expanding, and the smaller, once fiercely independent ones are banding together to compete. Nowhere is this on more plaintive display than London’s burgeoning Mayfair, where transatlantic titans Gagosian and Hauser & Wirth have new showpiece galleries in development, while the decades-old heart of the district’s art scene, Cork Street, is being largely redeveloped in a pair of schemes that promise to keep gallery space but have left many small gallery owners uncertain about their prospects.

Industry analyst Artprice estimates the contemporary market has grown 1,800% since 2000, and where there is this kind of profit available, there are an increasing number of people who want a cut. Enter a new type of art world denizen: the hyper-aggressive art adviser. Traditional advisers have offered provenance consultancy and advice on building a collection for as long as there have been collectors, but nowadays collectors-cum-investors are demanding to be the first to see pieces, to buy those 25% of works that are sold before Art Basel opens – which is the type of access the new advisers are providing.

The fees garnered from such services, especially for major works, are attractive enough that influencers in the field are leaving stable positions to start advising: in recent years, the head of Christie’s Post-War and Contemporary Art Department, Amy Cappellazzo, left to focus on advising, as did Tobias Meyer from Sotheby’s and Guy Bennett from Christie’s.

“The art market’s a whole new world now,” says Abigail Asher, president at Guggenheim Asher Associates, one of the industry’s foremost – and oldest – agencies. “It is a much more active and international arena, and there is the danger with enormous amounts of money floating around that people can get taken advantage of.” Auction houses, too, are shifting with “far more private sales, more guarantees, third- party guarantees,” says Asher, which makes former auction house employees well-placed to handle collectors’ needs.

One area where advisers are having little impact is online, the opposite pole to the blue chips that is also seeing expanding growth. Telephone bidding at auction houses, often by buyers who have only seen the catalogue reproductions, has long been common, so why not buy entirely over the internet? Both Christie’s and Sotheby’s are developing significant presences, though works sold are still primarily on the low end of the contemporary scale, as with Sotheby’s recent collaboration with Artsy, an online retailer with some 185,000 for-sale works listed.

One of the first significant online art auctions was Saffronart, which continues its India-focus – a market that has performed poorly over the past few years, but may turn out to be more stable than China – and the biggest talk is about broader online-only operations like Berlin-based Auctionata and Paddle8, with a new bricks- and-mortar home in Mayfair, which reported increases of 148% and 146%, respectively, in 2014.

The best case for increased growth comes from looking beyond traditional markets: Latin America and the Middle East are both rising steadily, and Africa is making enormous strides with a few major projects nearing completion (led by MOCAA in Cape Town) and a whole new generation of collectors building up an infrastructure across the continent and beyond.

Edmond Francey, head of Post-War and Contemporary Art at Christie’s London points towards a new class of works for consideration: “A trend that shows no sign of slowing down is the interest in a globalised modernism – artists from all over the world that have been working since the 1960s and 1970s but have yet to receive significant appreciation on a global scale are finally getting the attention that they deserve.”

Which means that though some are prophesying doom for what they call the contemporary bubble, there is a lot of room outside traditional spheres for expansion – and doubtless a new Taubman or two creating extraordinary private collections that will come to light in the decades to come.