In an age of Google Earth and dashboard GPS, it is becoming harder and harder to appreciate the enchantment that hand-drawn maps of far-away lands once conjured. Recognising this, contemporary artists and cartographers are seeking to put the enigma back in the atlas, as the British duo Langlands and Bell have done in the above image, 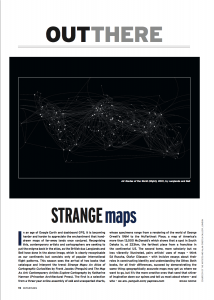 which is clearly recognisable as our continents but consists only of popular international flight patterns. This season sees the arrival of two books that catalogue and interpret the trend: Strange Maps: An Atlas of Cartographic Curiosities by Frank Jacobs (Penguin) and The Map As Art: Contemporary Artists Explore Cartography by Katharine Harmon (Princeton Architectural Press). The first is a selection from a three-year online assembly of odd and unexpected charts, whose specimens range from a rendering of the world of George Orwell’s 1984 to the McFarthest Place, a map of America’s more than 13,000 McDonald’s which shows that a spot in South Dakota is, at 233km, the farthest place from a franchise in the continental US. The second tome, more scholarly but no less vibrantly illustrated, pairs artists’ uses of maps – think Ed Ruscha, Olafur Eliasson – with incisive essays about their roles in constructing identity and understanding the Other. Both books, for all their differences, succeed by demonstrating the same thing: geographically accurate maps may get us where we want to go, but it’s the more creative ones that send that shiver of inspiration down our spines and tell us most about where – and who – we are. BRIAN NOONE