In a verdant vale on the Monte Argentario peninsula, the new Argentario Golf Resort & Spa turns over a new leaf for the fabled region. By Brian Noone 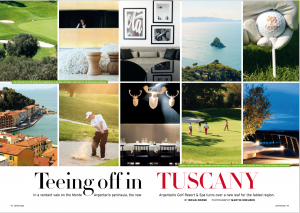 If Monte Argentario is known at all outside Italy, it is because of Il Pellicano, the seaside resort of terraced crimson cottages on the peninsula’s craggy southern edge. A 1960s manifestation of the romance between English aviator and playboy Michael Graham and Hollywood socialite Patsy Dalzell (they met at a place called Pelican Point in California), the resort’s heyday saw a heady mix of European and American A-listers arrive each summer in sleek cabrios for a week of la dolce vita. The tinsel gleam has faded a little since, but the breezy elegance remains, along with a Michelin-starred restaurant and supremely pleasing outlooks.

Similarly paradisiacal vistas can be found along the whole of the Via Panoramica, the aptly named byway that hugs the coast from Monte Argentario’s twin hubs, Porto Ercole and Porto Santo Stefano. Cerulean waters stretching to the peninsula’s sister islands, Giglio and Giannutri, battle with jagged outcrops and pastel-hued villas for attention – a quintessentially Mediterranean spectacle privileged to the 13,000 inhabitants, the bronzed yachties cruising the secluded bays and the well-heeled Romans who have for decades made these sun-dappled manses their summer playground. 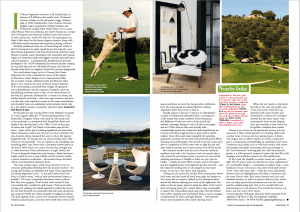 You could almost forget you’re in Tuscany. But Monte Argentario lies at the southwestern corner of the region, in Maremma, where, despite its low international profile, the succulent victuals, celebrated wines and Etruscan relics place it very much in the heart of Tuscan culture. Stretches of the surrounding countryside bear vestiges of rapid postwar industrialisation, but the expanses of unspoilt nature are breathtaking, nowhere more so than on the dense interior of the 60sq km peninsula. Freshened by a constant sea breeze, the familiar natural vernacular – olive trees, sage, rosemary and pine – is at free play with vegetation unique to the warm microclimate and abundant fauna, an undulating natural paradise shared only by a few solitary houses, a monastery and, since April, Argentario Golf Resort & Spa.

Set beneath the tree-covered 635m Punta Telegrafo mountain in a lush, fragrant valley, the 77-hectare sporting retreat is the brainchild of Augusto Orsini, who made his first yearly trek to the peninsula as a young boy with his golf pro father and family. A few decades later, in the 1980s, “a love of the place, of nature and of golf” led Orsini to formulate plans for the resort – plans which, given building regulations and intractable Italian bureaucracy, took some 20 years to come to fruition. The idea, however, always remained the same: to show the region’s progressive side. “In Tuscany, you are used to seeing rustic villas – which are very beautiful – but we wanted to do something new, something fresh,” says Orsini from a sheepskin-covered perch in the hotel’s lobby, where not a trace of terracotta, wrought iron or other timeworn Tuscan trope is in sight. Indeed, the 73-room, dragonfly-shaped structure features a flaxen limestone façade, which sits into a steep hillside, and the interiors profess a proud, whimsical modernism – all oversized lamps, fur-lined mirrors and streamlined sandstone baths.

The most modern aspect of the resort, however, is its eco-conscious philosophy, stretching from the locavore kitchen – the young chef Emiliano Lombardelli and many of the ingredients are Monte Argentario’s own – to the golf course, which was built, in Orsini’s words, “with as little environmental impact as possible”. Of course, as legendary American course architect Pete Dye once quipped, “Golf courses aren’t natural. If they were natural, they wouldn’t be golf courses.” And much earth-moving and -shaping was required to perfect the layout; but the land (formerly the peninsula’s informal waste dump) has also acquired 30,000 new plants, all grafts of indigenous species. The daily upkeep of the course now exclusively involves natural fertilisers and pesticides, a fact that shows itself only in bits of offseason patchiness and one that has garnered certification from the international eco-brand AgriCert, making Argentario Italy’s first course to have it.

Equally unique to the par 71 layout is its schizophrenic contrast of forested and unforested holes, a consequence of the terrain that course architects David Mezzacane and Baldovino Dassù have used to both tactical and aesthetic advantage. Playing to only 6,218m at its longest, around 1,000m shorter than most recently built championship layouts, the voluptuous, slaloming fairways are rimmed with thick rough and tee-to-green fescue, which swallow errant drives and make impossible the parachute approaches necessary for the small, well-protected greens. When European Tour professionals were invited to test the course soon after its completion in 2006, scores were so high that the staff were made to promise not to name names, even off the record.

But amateurs needn’t fear: four sets of tees are handicap equalisers, and with a bit of patience and conservative play, a trip around the picturesque course can prove an enormously satisfying experience. A handful of holes are even ripe for birdies – notably the petite 289m seventh, with its flat green, and the straightforward, wind-sheltered par-five eleventh – and the expansive landing areas on the longest par fours give licence to rip into a few drives with impunity.

Closing out the round, the devilish 210m seventeenth, where both water and sand ward off timid shots, plays the hardest on the course, and no respite is offered by the subsequent drive around the fairway-cleaving pine trees on the eighteenth. But safely on the last green, putter in hand, the allure of the resort’s three swimming pools, just a stone’s throw away, is impossible to ignore. The commodious black-and-white tiled spa behind them offers a Kneipp pool and Turkish bath, as well as massages complemented by aroma and light therapy – well-deserved repose and recuperation after a taxing round.

When the sun begins to dip below the hills to the west, the public areas of the four-storey hotel liven up. Speckled with quiet enclaves and anchored by a cabinet-of-curiosities-themed bar, the space buzzes with international beau monde sipping their pre-prandials as they watch the last golfers complete their rounds.

Dinner, if not served on the spectacular terrace, is in the restaurant, a black-walled pastiche of a hunting chalet with wooden busts of moose and deer gazing down on diners. The elegant fare is neither simple nor overly complicated and is accompanied, unsurprisingly, by superlative local wines. Toothsome local dishes such as wild boar terrine with onion-and-orange marmalade and juniper bread pay homage to the “zero-kilometre” sourcing goal, but until the property’s garden is in full operation, imported classics like beef filet with asparagus and artichoke tempura are able substitutions.

At day’s end, the playfully eccentric rooms are a welcome sight. The 66 junior suites are divided into three sophisticated yet comfortable designs – a minimalist art gallery look, a more traditional Tuscan mood and a chic, dark wood-and-chrome “Club” style with open bath – while the seven individually themed suites are highlighted by the 80sq m Penthouse and the rustic Home Suite. Each room features mod cons and rainforest showers, as well as a spacious balcony, from where guests enjoy spectacular panoramas out over the course and the neighbouring polo club to the wooded hills and shimmering sea in the distance. This is both the Tuscany you know and one you’d never expect.