Ignored for decades for beIng neIther pure art nor desIgn, the Lalannes playful, nature-inspIred sculptures are back in vogue. By  Brian Noone 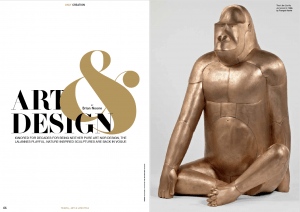 Of the many surprises at the 2009 Yves Saint Laurent estate auction, the bar designed by François-Xavier Lalanne – best known, with his wife Claude, as Les Lalanne – was one of the biggest, selling for €2.75m, more than ten times its pre-sale estimate.

For young collectors, the auction, which featured ten lots in total by the pair, served as an introduction to the French artists, albeit a year after François-Xavier’s death. For artworld denizens of a certain age, however, it was an enthusiastic reacquaintance with works that have been equal parts iconic and iconoclastic since the duo began working together in the 1950s. 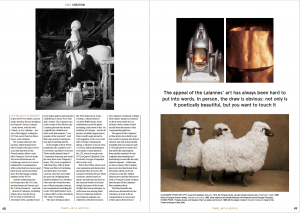 And the enthusiasm has  not let up: since the YSL sale, auction houses in Europe and the US have featured – and sold – dozens of Lalannes, including a flock of ten woolly sheep for €5.73m at Christie’s in December 2011, and there have been major gallery and museum exhibitions in Paris, New York and London. The Lalannes are, in the words of Ben Brown, the London gallerist who hosted a significant exhibition of their work this summer, “very popular at the moment”. And this long-awaited resurgence may just be getting started. 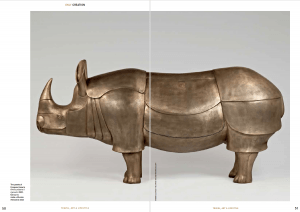 At the height of their 1960s popularity, the Lalannes were everywhere and knew everyone. Their studio abutted that of Constantin Brancusi and wasn’t far away from Jean Tinguely’s home. They were acquainted with Man Ray, Niki de Saint Phalle and Marcel Duchamp. And then there was Saint Laurent, who they met while the pair was designing shop- window displays for Christian Dior and who would become one of their principle patrons, his commissions including the iconic 1969 gold bustier worn to great effect on the catwalk by YSL muse Veruschka. 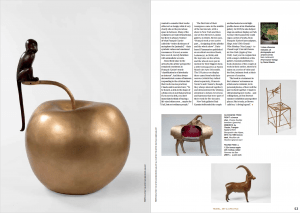 The duo’s breakout show, the 1966 Salon de la Jeune Peinture, which featured 24 of the fluffy sheep, led to exhibitions across the globe – including a solo show at the Art Institute of Chicago – and to all manner of public appearances, from a multi-page spread in Life magazine to the cover and title of Serge Gainsbourg’s album, L’Homme à tête de chou. A 1.85m Lalanne grasshopper even made a royal splash in the UK, when it was given in 1972 to Queen Elizabeth II by President Georges Pompidou after a state visit.

But in the 1980s, when overt conceptualism and abstraction dominated the art scene, the Lalannes fell from favour. Their creations, always based on nature and already perched on the tenuous border of art and design, had none of the ironic twinkle that was in demand. As Jeff Koons was leaving Wall Street to make his stainless steel balloon animals over which the artworld swooned, the Lalannes continued crafting their nature-inspired creations on their rural estate in Ury, an hour’s drive south of Paris and far from the bustle of the cosmopolitan galleries.

The appeal of the Lalannes’ art has always been hard to put into words. In person, the draw is obvious: not only is it poetically beautiful, but you want to touch it. The pair put in so much care into perfectly marrying the form and the material of each sculpture that running one’s hand along it seems like the only natural response – which may be why so many of the Lalanne pieces are also functional, from the sheep, which can be sat or laid on, to the fire-bellied baboon stove and the rhinoceros desk, a François-Xavier creation that was part of the Lalannes’ first combined show.

This functionality has often been detrimental to the Lalannes, at least as far as categorisation is concerned. Critics and collectors have wanted to consider their works either art or design, while it very clearly sits on the precarious space in between. Many of the sculptures are indeed functional, but there is always evidence of what François-Xavier called the “entire dictionary of metaphors for [animals]” – their symbolic values and emotional resonances. It is not, as some have seen it, merely furniture with animalistic accents.

About their place in the art world, the artists’ perspective remained consistent; in François-Xavier’s words “classification is of absolutely no interest”. And they always demonstrated a sense of humour: responding to the criticism that their work was too practical, Claude said in an interview, “To be honest, a desk in the shape of a rhinoceros is not that practical. If you need a desk, you don’t immediately think of buying a life-sized rhinoceros … maybe for Dalí, but not ordinary people.”

The first hint of their resurgence came in the middle of the last decade, with a show in New York and then one at Ben Brown’s London gallery, in which, Brown says, “François took a very active part … designing all the plinths and the whole show”. Paris- based Flammarion published an excellent oversized book, Lalanne(s), in 2008, still the top tome on the artists, and the wheels were put in motion for their biggest show, a 2010 retrospective at Paris’s Musée des Arts Décoratifs. The 150 pieces on display there came from both their oeuvres (which they talked about separately, Francois- Xavier’s and Claude’s, though they always showed together) and demonstrated the whimsy, attention to detail, cleverness and harmony that were part of their work for five decades.

New York gallerist Paul Kasmin befriended the couple and has hosted several high- profile shows at his Manhattan gallery. In 2009, he also helped stage an outdoor display on Park Avenue where passersby could enjoy a series of works, from François-Xavier’s last sculpture, Singe Avisé (Très Grand) – Wise Monkey (Very Large) – to Claude’s apt 2.5m tall Pomme de New York (Apple of New York). Last year in conjunction with a major exhibition at his gallery, Kasmin published a book of photos of the couple at work in their atelier, shots he’d taken on a series of visits and the first, intimate look at their process of creation.

The book is a testament to the Lalannes’ seriousness as artists and a reminder, in its personal photos, of how well the pair worked together. Claude is still producing new works – and selling them, at Ben Brown’s summer exhibition among other places. She is truly, as Brown calls her, “a living legend”.