Hidden away in his Alpine atelier, an instrument-maker of world renown seeks perfection through metal. By Brian Noone 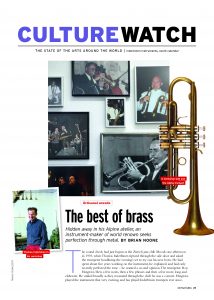 Sound check had just begun at the Zurich jazz club Moods one afternoon in 1993, when Thomas Inderbinen tiptoed through the side door and asked the trumpeter headlining the evening’s set to try out his new horn. He had spent about five years working on the instrument, he explained, and had only recently perfected the tone – he wanted a second opinion. The trumpeter, Roy Hargrove, blew a few notes, then a few phrases and then a few more, long and elaborate. He smiled broadly as they resonated through the club: he was a convert. Hargrove played the instrument that very evening, and has played Inderbinen trumpets ever since, including on both of his Grammy-winning albums.

Such instant brass baptisms have become commonplace for the 48-year-old instrument maker, whose clients include jazz luminaries Randy Brecker, Till Brönner and Candy Dulfer, but in the rarefied mountain air of Inderbinen’s sleepy Swiss hamlet, residents can tell visitors less about his talents than they can about the elaborate hand-painted gables which shade the town’s grandest structures or about the nearby building where, just over a century ago, Albert Einstein completed secondary school. 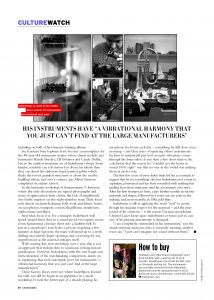 In the basement workshop of Aarauerstrasse 9, however, where the only decorations are signed photographs and notes of appreciation from clients, the lack of neighbourly awe barely registers on the eight-member team. Their focus rests almost exclusively, during both work and leisure hours, on saxophones, trumpets, cornets, flugelhorns, trombones, euphoniums and flutes.

And what focus it is. For a trumpet, Inderbinen will spend around three days in a sound-proof, two-square-metre room hammering a bronze sheet into a faultless bell. To put in a saxophone’s tone holes, a process requiring a few minutes at large factories, the team will spend up to a week drilling successively larger openings and correcting for any imperfections as the material reshapes itself.

With waiting lists now stretching over a year, this is not an approach that endears him to musicians seeking instant gratification. However, Inderbinen, with the sure hands and meticulousness of his watchmaking compatriots, insists on it, explaining that such exactitude gives his instruments “a vibrational harmony that you just can’t find at the large manufacturers”.

These factory floors were not where Inderbinen learned his craft, nor did he begin as an apprentice in a small workshop. It took the better part of a decade playing his saxophone for hours each day – something he still does every morning – and then years of repairing others’ instruments for him to understand just how acoustic vibrations course through the brass tubes. It was then a few short steps to his conclusion that the reason he “couldn’t get the horns to sound 100% right” was that no-one in the world was making them in such a way.

The first few years of error-laden trials led his accountant to suggest that he try something else, but Inderbinen, not a man to capitulate, persevered and has been rewarded with nothing but smiling faces from musicians (and his accountant) ever since. After his first trumpet, in brass, came further models in various materials and shapes, followed by a tenor sax, six years in the making, and, most recently, an 18kt gold flute.

Inderbinen scoffs at applying the word “soul” to metal, though his singular respect for the material – and the pure sound of his creations – is the reason German saxophonist Christof Lauer keeps spare Inderbinens at home, just in case one of his playing instruments is damaged.

“I am completely entrenched in his instruments,” says the award-winning musician, who is currently awaiting another tenor sax. “I just can’t imagine my sound without them.”

Trumpets and other brass instruments start from €3,500, with a waiting list of 12-14 months; saxophones start from €6,300, with an 18-month waiting list. The instruments are available exclusively from Inderbinen Blaseninstrumente, Aarauerstrasse 9, 5033 Buchs bei Aarau, Switzerland; +41 62 822 83 28; inderbinen.com.