After a year of realignment and shifting expectations, the art market is looking to 2017 with an eye on diversification. Brian Noon surveys the art world’s new sombre mood

Ebullience and defiance made uncomfortable bedfellows at this year’s Frieze in London, where the art world was determined to shake off naysayers by putting on a grand spectacle. For the most part it worked: the British pound was so low, thanks to Brexit, that many auction totals beat last year’s in sterling terms (but not dollar), and the glitterati were especially bright thanks to the fair’s new partnership with WME-IMG, the growing American media conglomerate. 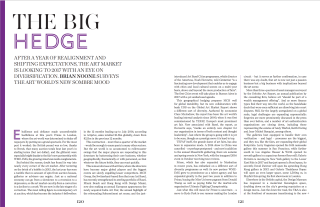 But behind the scenes, doubt has found its way into nearly every corner of the art market. After teetering on the brink of a bubble in 2015, the last year has seen a tumble that no amount of spin from auction houses, galleries or advisers can negate. Just as a national economy can go from a slowdown to a recession to a depression, so the art market can slip from a correction to a decline to a crash. We are now in the late stages of a correction. The most telling figure is contemporary art at auction, which has become the industry’s bellwether: in the 12 months leading up to July 2016, according to Artprice, sales totalled $1.5bn globally, down from $2.1bn in the previous 12 months. 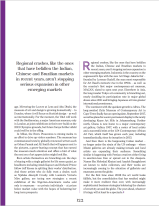 This contraction – more than a quarter of the market – would be enough to cause panic in many other sectors. But the art world is so accustomed to rollercoaster swings that the major players are responding to this downturn by buttressing their core business, whether geographically, thematically or with personnel, so that whatever the future holds, they can react quickly.

This is most obvious with art fairs, where the directors have become major global players and the biggest events are slowly engulfing lesser competitors. MCH Group, the Switzerland-based firm that runs Art Basel, has recently strengthened its sterling portfolio of Basel, Miami Beach and Hong Kong with Design Miami, now also making an annual European appearance; the newly acquired India Art Fair, the annual highlight of the rebounding Subcontinent art scene; and the just-introduced Art Basel Cities programme, which director of the Americas, Noah Horowitz, told Centurion “is a fascinating new development that enables us to engage with cities and local cultural scenes on a multi-year basis, above and beyond the mere production of fairs”. The first Cities event will take place in Buenos Aires in 2017 with a yet undisclosed agenda.

This geographical hedging prepares MCH well for global instability, but its new collaboration with bank UBS on the Global Art Market Report shows a different sort of diversity. Authored by economist Clare McAndrew, the report has been the art world’s leading internal analysis since 2000, when it was first commissioned by TEFAF, Europe’s most prominent art fair. Now associated with Basel, the report, as Horowitz says, “marks an entirely new chapter for our organisation in terms of both content and thought leadership”. Just where the group is going with it is yet to be seen, though as a prestige move it is hard to top.

TEFAF itself, the grande dame of art fairs, has also been in expansion mode. A 2014 show in China was cancelled – or perhaps postponed – and now in addition to the annual Maastricht gathering, there are autumn and spring events in New York, with the inaugural 2016 event in October receiving rave reviews.

Frieze, which has also expanded to Manhattan in recent years, has embarked on a different sort of diversity programme as well: its new partner WME- IMG grew to prominence as a talent agency and has expanded greatly in the past two years in addition to Frieze, buying the Miss Universe pageant from Donald Trump as well as paying $4bn for the martial-arts organisation Ultimate Fighting Championship.

Just what this will mean for Frieze is uncertain – a move to Hyde Park is one rumour making the London circuit – but it serves as further confirmation, in case there was any doubt, that art is now not just a passion business but a big business with implications beyond the art scene.

More than three-quarters of asset managers surveyed by the Deloitte Art Report, an annual publication by the consulting firm, believe art “should be part of a wealth management offering”. And as more finance types find their way into the world, so the handshake deals that were once sufficient are dissolving into court disputes. Still, for the largely unregulated on a global scale, legal challenges are expanding exponentially: forgeries are more prominently discussed in the press than ever before, and a number of art-authentication organisations are closing down, including those representing the estates of Andy Warhol, Keith Haring and Jean-Michel Basquiat, among others.

The galleries best equipped to handle their own verification – and legal – processes are the biggest, and they too, like the fairs, are expanding their global footprints: Larry Gagosian opened his 16th namesake gallery this summer in San Francisco, while farther south in Los Angeles Hauser & Wirth opened its seventh gallery in a capacious former flour mill; Galerie Perrotin is moving its New York gallery to the Lower East Side in 2017 and has just opened a Seoul space, its seventh; David Zwirner will open his sprawling Hong Kong gallery in 2017; and Galerie Thaddaeus Ropac will open an even larger space, some 1,500sq m, in Mayfair this spring, his first showroom in London.

Elsewhere in the British capital, the Design Museum has reopened in a modernist Kensington space, doubling down on the city’s growing reputation as a design mecca. Just the down the road, the V&A is also at the forefront of museums transitioning to the new age. Mirroring the Louvre at Lens and Abu Dhabi, the museum of art and design is growing domestically – to Dundee, where it will focus on Scottish design – as well as internationally. For the moment, the V&A will work with the Smithsonian, a major American museum, only in London, at joint exhibitions in their new-build on the 2012 Olympics grounds, but future forays farther afield could well be in the offing.

In Milan, the Brera Pinacoteca is mixing media in an effort to drive up visitor numbers. The museum has commissioned texts by globally renowned writers such as Orhan Pamuk and Ali Smith that will appear next to the pictures, a genre-busting concept that has earned the museum much attention and offers a hint of what the next era of art appreciation might look like.

Even artists themselves are branching out: the days of staying with a single gallerist for life seem quaint, as headliners including Anish Kapoor and Richard Prince follow Jeff Koons in splitting their works’ distribution. And those artists who do fully trust a dealer, such as Njideka Akunyili Crosby with London’s Victoria Miro gallery, are trying new strategies: a recent exhibition of the Nigerian-American’s works sold only to museums – no private individuals – at prices below market value with the hopes of bolstering her long-term prospects.

Regional crashes, like the ones that have befallen the Indian, Chinese and Brazilian markets in recent years, aren’t stopping serious expansion in other emerging markets. Indonesia is the country on the cognoscenti’s lips with the new Art Stage Jakarta fair – founded by Lorenzo Rudolf, the man most responsible for Art Basel’s meteoric rise in the 1990s – as well as the country’s first major contemporary-art museum, MACAN, slated to open next year. Elsewhere in Asia, the long-insular Tokyo art community is branching out, nearly doubling its participation rate in major global shows since 2011 and bringing Japanese art into greater international prominence.

The continent with the quickest growth is Africa. The long-awaited Zeitz Museum of Contemporary Art in Cape Town finally has an opening date, September 2017, as well as plans for a semi-permanent display in the newly developing Keyes Art Mile in Johannesburg. Farther north, Ghana is now home to a major contemporary art gallery, Gallery 1957, with a roster of local artists and a successful stint at the 1:54 Contemporary African Art Fair, which itself has grown each year, including transatlantically, since its inception in 2013.

And then there is the burgeoning Cuban market – no longer under the strain of the US embargo – where Miami galleries are already making inroads and local artists are expanding their audience. Something similar is happening with Persian creatives either living in sanction-less Iran or spread out in the diaspora. Names like Mehrdad Khataei and Azadeh Razaghdoost are known to niche collectors, and their works are increasingly coming to the attention of gallerists and museums across the globe.

For the first time since 2008 the art world looks fallible, but the consolidation that has resulted might make it more resilient than ever, with increasingly sophisticated business strategies bolstering the clusters of creativity around the globe. The year ahead, whatever it brings, will at least be a spectacle.