Halfway between the Scottish mainland and the Irish coast lies a crescent-shaped island called Islay. Home to the Lord of the Isles for hundreds of years, the windswept landmass now boasts another kind of nobility, an octet of renowned whisky distilleries. Brian Noone went in search of the island’s essence 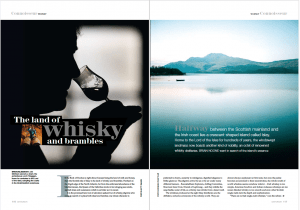 If the Book of Exodus is right about Israel being the land of milk and honey, then the Scottish isle of Islay is the land of whisky and brambles. Perched on the frigid edge of the North Atlantic, far from the ambrosial abundance of the Mediterranean, the Queen of the Hebrides revels in her stinging sea winds, asphalt skies and sustenance which is as bitter as it is sweet.

It is the promised land not of salvation seekers but of whisky pilgrims who come in search of a place both ideal and familiar, one where character is preferred to charm, austerity to indulgence, dignified reserve to blithe glamour. The pilgrims arrive by sea or by air under many different banners – Bunnahabhain Explorers, Ardbeg Committee, Bowmore Inner Core, Friends of Laphroaig – and they imbibe the uisge beatha, water of life, as a thirsty man drinks from a desert well. 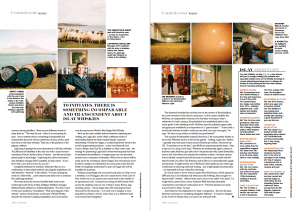 The whiskies produced at the eight Islay distilleries are the diffident, reclusive aristocrats of the whisky world. They are almost always unpleasant at first taste, but once the palate becomes accustomed to their eccentricities, the whole swath of world whiskies seems somehow inferior – Irish whiskey is too simple, American bourbon and Indian molasses whiskies are too sweet, blended whisky is too smooth and even other Scottish single malts lack the raw power of Islay whiskies.

“There are no bad single malts,” runs the refrain common among distillers, “there are just different moods to enjoy them in.” This may be true – there is no accounting for taste – but to initiates there is something incomparable and transcendent about the robust coalescence of peat, smoke, earth and salt in the Islay whiskies. They are, in the parlance of the pilgrim, sublime.

Laphroaig is perhaps the most characterful of all Islay whiskies. The 200-year-old distillery is the only one with a royal warrant – it produces Prince Charles’s dram of choice – and the brand takes special pride in its heritage. “Laphroaig isn’t about innovation,” says distillery manager John Campbell, an Islay native. “If you don’t like it, you don’t; if you do, you do.” Campbell attributes his whiskies’ distinctive flavour to a combination of time-tested methods and singular ingredients. He calls himself a “steward” of the whisky: “I’m just carrying the torch for a little while…until someone else takes over to continue the Laphroaig tradition.”

Two miles down the narrow, bramble-lined road on the blustery south shore of Islay, Ardbeg’s distillery manager, Michael Heads, abides by a similar philosophy. “You don’t want to lose your traditions,” he explains. “They are a big part of the whisky.” And he should know: at this year’s World Whisky Awards, the industry’s leading competition, his Corryvreckan won the top honour, World’s Best Single Malt Whisky.

Back up the coast, nestled midway between Laphroaig and Ardbeg, sits Lagavulin, which offers a different model of stewardship behind its white-washed façade: corporate control. Owned by Diageo, a London-based firm which is the world’s largest spirits producer – it also runs Smirnoff, Jose Cuervo, Baileys and Caol Ila, a distillery on Islay’s east coast – the strategy for preserving Lagavulin’s award-winning taste has been to mechanise the distillation. A single person can run the entire process from a computer workstation. What’s lost in charm will be made up for by consistency, claims Diageo, but connoisseurs won’t be able to decide for themselves for some years, when the first bottle of completely mechanised 12-year-old Lagavulin will be available for purchase.

Perhaps surprisingly, the most profound place on Islay is not a distillery. It is Finlaggan, the now ruined home of the Lord of Isles which sits on an ancient man-made islet in the middle of a secluded loch. Gazing from among its half-buried walls across the rippling water at one of Islay’s many Bronze Age standing stones – whose larger-than-life meaning has been obscured by the centuries – it is hard not to imagine a time, long before whisky’s arrival, when Islay was a different kind of promised land altogether.

This historical humility has not been lost on the owners of Bruichladdich, the most irreverent of the island’s distilleries. Led by master distiller Jim McEwan, an irrepressible visionary who has been working in Islay distilleries for half a century, Bruichladdich has established itself on the avant-garde of the distilling world. McEwan sees the polished copper stills and giant pine washbacks as components of a “giant kitchen”. “A chef with a world-class kitchen wouldn’t make just one dish over and over again,” he says. “So why not go where no whisky has gone before?”

This autumn Bruichladdich released Octomore 3, the most peated whisky in the world. Whiskies known to be heavily peated – Ardbeg, Lagavulin, Talisker – max their peat content around 50 parts per million. Octomore has 152. “It punches you in the face,” says McEwan, pantomiming the action, “then wraps you in a long, warm hug.” Whiskies are traditionally aged in sherry or bourbon casks; McEwan got casks from viticulture titans like Lafite Rothschild, Latour and Haut-Brion and matured his whiskies in them. His latest venture was to rebuild a scrap-bound still in order to produce a gin made with the island’s herbs. He calls it The Botanist, and its flavour is extraordinarily supple and balanced. It might well be one of McEwan’s best spirits yet, but with huge warehouses of maturing casks just waiting – and a tight-lipped workforce – it’s impossible to know what else is brewing.

It’s much easier to know what to expect from Kilchoman, which opened in 2005 and has thus far released only three-year-old bottlings, the youngest it’s legal to label “whisky”. (Before three years, it has to be called “raw spirit”.) A rough-hewn, peaty dram, owner Anthony Wills has been pleasantly surprised by connoisseurs’ enthusiasm for it. “The best decision we made was to build on Islay,” he says.

And whatever the explanation for Islay’s uniqueness – the soil, the peat, the briny sea wind or something altogether different – it’s hard to disagree. Islay is a land to be reckoned with.

For each distillery on Islay (EYE-luh), a new release (NR) and a vintage bottling (VB) available from specialist retailers such as The Whisky Exchange in London (thewhiskyexchange.com), Le Maison du Whisky in Paris (whisky.fr) and the online Whisky Store in Germany (whisky.de).

NR: Corryvreckan won 2010 World Whisky of the Year, but Supernova is out of this world

NR: The 18 is the most ponderous, with both floral and citrus notes

NR: Octomore 3 is more subtle than the superlatives suggest

NR: Less peaty than the rest, the 18 is excellent as always with dry overtones and a hint of tart pear

NR: The 18 offers a complex balance of fire smoke, sea salt and a hint of sweetness

VB: From a single 1997 cask, the Manager’s Choice is indeed choice

NR: The 2010 Autumn, which was aged only in bourbon barrels

VB: The distillery is now buying back individual casks sold shortly after opening – a good investment if you can find one

NR: The classic 16, a peated wonder with surprising spicy balance

VB: Full-bodied with enormous personality, the 21 has a long, lingering finish

NR: Having replaced Prince Charles’s favourite 15-year-old, the 18 is an archetype in the making

VB: The 27 delivers a sumptuous mix of dark coffee, walnuts, caramel and peat

VB: Closed since 1983 and now owned and used by Diageo to malt barley, the few remaining bottles are collectors’ items, among them the 8th Release, bottled in 2008 with 29-year-old whisky