A raft of new openings is transforming the image – and reality – of Luxembourg’s capital city. Brian Noone reports 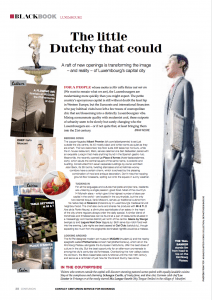 For a people whose motto is Mir wëlle bleiwe wat mir sin (we want to remain what we are), the Luxembourgers are modernising more quickly than you might expect. The petite country’s eponymous capital is still without doubt the least hip in Western Europe, but the Eurocrats and international financiers who pay habitual visits have left a few traces of cosmopolitan chic that are blossoming into a distinctly Luxembourgian vibe. Mixing consummate quality with modernist cool, these outposts of urbanity seem to be slowly but surely changing who the Luxembourgers are – or if not quite that, at least bringing them into the 21st century.

Bedding Down
The copper-façaded Albert Premier (slh.com/albertpremier) is set just outside the city centre, its 40 mostly black and white rooms as quiet as they are smart. The two-balconied, top-floor suite 405 takes top honours, while the in-house restaurant, Mahi, serves calamari à la San Sebastian paired with an exquisite Juraçon that rivals anything found in the Spanish gastro-hub. Meanwhile, the recently opened Le Place d’Armes (hotel-leplacedarmes. com), which abuts the central square of the same name, is eclectic and bustling. Constructed from seven separate buildings by owner-architect Jean Beck, its 28 rooms, twisting staircases and sometimes wonky corridors have a certain charm, which is echoed by the pleasing combination of mod and antique decoration. Don’t miss the hopping ground-floor brasserie, spilling out onto the square in sunny weather.

Tucking In
For all the languages and cultures that jostle and jibe here, residents are united by a single passion: good food. Most of the country’s 14 Michelin stars – which give it the highest number of stars per capita in the world – are located in the countryside, but the only two-starred toque, Ilario Mosconi, serves up traditional cuisine from his native Italy at Mosconi (mosconi.lu) in Luxembourg’s medieval Grund neighbourhood. The chef also owns and shares his produce with Mi & Ti (8 Ave de la Porte-Neuve), a diminutive sophisticate of an eatery in the heart of the city where regulars always order the daily special. A similar blend of trendiness and timelessness can be found at a pair of restaurants situated in a misleadingly commercial district just north of the centre: Glacis by Wengé (wenge.lu) and Lagura Next Door (lagura.lu). Both serve top-notch food well into the evening. Late nights are best passed at Cat Club (catclub.lu), though expecting too much from the anglophile-dominated nightlife would be a mistake.

Looking Around
The IM Pei-designed modern art museum MUDAM (mudam.lu) and the nearby spaghetti-walled Philharmonie concert hall (philharmonie.lu), which sit on the Kirchberg Plateau alongside the European institutions, offer the best dose of culture in the city. But the best opportunity for an afternoon promenade is among the city’s centuries-old fortresses. Overlooking the river valleys below the old town, the Bock Casemates were functional until the mid-19th century and serve as a reminder of just how far the Grand Duchy has come.

In The Countryside
Visitors who venture outside the capital will discover stunning pastoral scenes paired with equally laudable cuisine. Stay at the sumptuous and charming Schengen Castle, of treaty fame, and dine chez German celeb chef Lea Linster in Frisange or at the newly starred Ma Langue Sourit (My Tongue Smiles) in the village of Moutfort.