Linz’s new opera house serves up a metropolitan-sized dose of culture to the diminutive Austrian city. Brian Noone reports 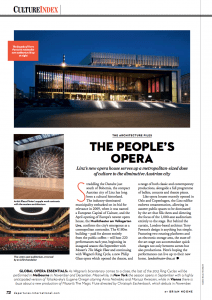 Straddling the Danube just south of Bohemia, the compact Austrian city of Linz has long been a cultural hinterland. The industry-dominated municipality embarked on its bid for relevance in 2009, when it was named a European Capital of Culture, and the April opening of Europe’s newest opera house, the Musiktheater am Volksgarten Linz, confirms the city’s emergence as a cosmopolitan contender. The €180m building – paid for almost entirely from the public coffers – will host 220 performances each year, beginning its inaugural season this September with Mozart’s The Magic Flute and continuing with Wagner’s Ring Cycle, a new Philip Glass opera which opened the theatre, and a range of both classic and contemporary productions, alongside a full programme of ballets, concerts and theatre pieces.

Like opera houses recently opened in Oslo and Copenhagen, the Linz edifice eschews ornamentation, allowing its austere public spaces to be dominated by the art that fills them and directing the focus of the 1,000-seat auditorium entirely to the stage. But behind the curtain, London-based architect Terry Pawson’s design is anything but simple. Featuring two rotating platforms and an electronic storage area, the state-of- the-art stage can accommodate quick changes not only between scenes but also productions. Here’s hoping the performances can live up to their new home.