Just over a century after its first oil boom, Baku is back in the global spotlight, with a heady collection of cosmopolitan hotels, restaurants and architectural treasures. By Brian Noone 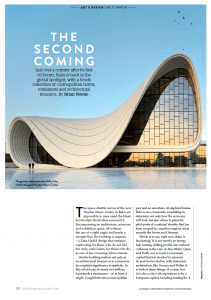 The space-shuttle curves of the new Heydar Aliyev Center in Baku are impossible to miss amid the bleak Soviet-style blocks that surround it. Encompassing an auditorium, museum and exhibition space, all without the use of a right angle and barely a straight line, the building is majestic – a Zaha Hadid design that remains captivating for those who do not like her style, and counts, for those who do, as one of her crowning achievements.

But the building matters not only as an architectural treasure or as a museum: its weightier significance is symbolic. In this oil-rich city of nearly two million, it portends a renaissance – or, at least, it might. Caught between a cosmopolitan past and an uncertain, oil-depleted future, Baku is at a crossroads, scrambling to determine not only how the economy will look, but also where to plant the pitch posts of a national identity that has been swayed by countless empires, most recently the Soviet and Ottoman. 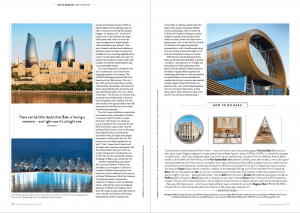 Which is to say, right now, Baku is fascinating. It is not merely an energy hub turning drilling profits into cultural collateral in the vein of Abu Dhabi, Qatar and Perth, nor is it just a Caucasian capital that has decided to reinvent its post-Soviet skyline with statement architecture, like Grozny and Tbilisi. It is both of these things, of course, but it is also a city with aspirations to be a European capital, including hosting the inaugural European Games in 2015, an official offshoot of the Olympics that no other country has ever had the outsized budget – or popular will – to host. It is a city, in the words of British GQ editor Dylan Jones, that “feels it is so on the cusp of change that it might explode with excitement at any minute”. This sort of frenetic optimism and ambition is infectious, and as a matter of course has led Baku to have a buzzing nightlife scene, a pair of world-class hotels and a bevy of eateries that combine to make a trip to the Caspian not merely exhilarating but also very comfortable indeed.

Like any respectable cosmopolis, the city’s architecture is as varied as the languages spoken on its streets. The UNESCO Heritage-protected Old City dates from the 12th century. The city’s late-19th-century blossoming, courtesy of Rothschild, Rockefeller and Nobel oil titans, bequeathed grand mansions and tree-lined boulevards to the new “Paris of the East”. The Soviets, in contrast, built primarily banal lifeless flats, which are now being given new façades, but they also erected a few grand edifices that still stand proud on the Bulvar, the arching waterfront promenade.

The city’s recent additions, meanwhile, have been mostly postmodern: Hadid’s curvaceous cultural centre; a carpet museum in the shape of a rolled-up rug; Crystal Hall, the arena built for the 2012 Eurovision song contest; and the striking Flame Towers, a trio of 30-storey skyscrapers built on a promontory and fitted with LED lights that display animations visible across the city. The towers have an added significance as well: “Azer” means fire in Azeri, and the region has long been associated with the eternal flames that spurt from its energy-rich ground, including the one in the 17th-century Zoroastrian temple, Ateshgah of Baku, just outside the city.

Another longstanding association the Caucusus boasts is with the arts, and Baku is no exception. Cellist and conductor Mstislav Rostropovich was born here, and in addition to the century- old State Philharmonic Hall, the National Art Museum holds an impressive collection of Western, Azeri and Russian artists, while the Jean Nouvel-designed Museum of Modern Art displays more than 700 works, mostly Azeri 20th century, with a handful of Picassos and Russian masterpieces. On the contemporary scene, Baku is crafting a global name for itself, with London auctioneer Phillips de Pury dedicating a show to Azeri art in 2012 and Christie’s hosting an auction in Baku in tandem with dynamic local collective Yarat!, which now has its own gallery space, Yay!, in the Old City. Gazelli Art House is the major international representative, with a headline-garnering line-up of artists and events based out of its bi-level Mayfair boutique in London.

With this hive of international activity, there can be little doubt that Baku is having a moment – and right now it’s a bright one, as beautiful as Hadid’s gleaming white beacon. But the specially created panels on the edifice’s façade already appear to be weathering, and there is a very real question of whether Baku is on the ascendance or whether the city has, a century later, reached another apogee. Plans for the future are grand in scale – the world’s tallest building, two new city-sized urban plans, among many others. Time will tell how they work out; for now, the city is mesmerising.

How To Do Baku

To set the scene, nowhere beats the Flame Towers – only one of which is open, the spire belonging to Fairmont Baku (fairmont.com/ baku, above, centre). Elegantly designed in muted, earthy hues and featuring a two-storey, 3,500sq m ESPA, it is a hotel that competes on a global scale – pick a room facing the Caspian, over which the sun rises every day. Just down the hill on Neftchilar Avenue, Baku’s answer to Bond Street and Fifth Avenue, sits the Four seasons Baku ( fourseasons.com/baku, above, left and right), a new-build in grand neoclassical style that is the Fairmont’s only competitor. Stunningly outfitted and amiably staffed, its expansive rooms, vaulted pool and ornate ballroom are all spectacular. Guests need not leave the hotels for the city’s best fine dining: Four Seasons’s sumptuous rooftop fish restaurant Kaspia boasts a salmon-scale floor in addition to the delectable offerings, and Fairmont has feted French outpost Le Bistro, the city’s top steakhouse, Alov, and a much-awaited panoramic rooftop spot. A visit to Baku wouldn’t be complete without at least one night on the town – eating perhaps at Azeri-themed Sahil(sahil-dining.az) or Sumakh (sumakh.az), sipping post-prandials at Pasifico (pasifico-dining.az) or Eleven (eleven.az), or doing both at pan-Asian-themed Chinar (chinar-dining.com), the first buzzworthy hotspot in the city which remains reservations-only at weekends. A less trendy but no less atmospheric option are the old caravanserais – Baku was a Silk Road outpost – which serve ornate traditional meals in characterful surrounds: Mugham club (+994 12 492 3176) is the pick of the lot.