As Indian art sloughs off its British heritage and finds its own unique voice, the place to buy it is, often enough, abroad. Brian Noone reports 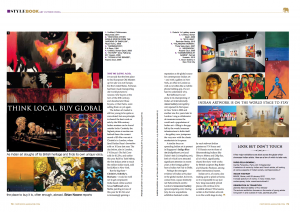 Not so long ago, it was said that the best place to find European Old Masters up for sale was not Europe, but the United States. Fortunes had been made transporting old-world pictures to nouveau riche buyers at the turn of the 20th century, and decades later those buyers, or their heirs, were selling them on yet again.

The Indian art market is still too young to be quite so convoluted, but one principle is shared: the best work on sale by the 20th-century Indian masters can be found outside India. Certainly the highest prices at auction are fetched there: the current record of $3.49m was set at Christie’s in London, where Syed Haider Raza’s Saurashtra sold on 10 June last year. The day before, also in London, F N Souza’s The Red Curse sold for $1.27m, and earlier this year Bulls by Tyeb Mehta, the first Indian artist to reach the million-dollar mark, sold for $2.82m in New York.

But the big three – Christie’s, Sotheby’s, Bonhams – would do well not to get complacent: India-based online auction house Saffronart sold a Mehta painting in June of this year for $1.31m and is increasingly gaining a reputation as the global source for contemporary Indian art – and with a gallery in New York, an office in London as well as novelties like a mobile- phone bidding app, it’s not hard to understand why.

But Saffronart is not alone in its championing of Indian art internationally. Aicon Gallery (aicongallery. com) opened its first space in New York in 2002 and another one five years later in London. Long a collaborator of museums across the world and a populariser of Indian art – filling in the gap left by the woeful museum infrastructure in India itself – the gallery now juxtaposes the very new with the classic modernists in its spaces.

A similar focus on spreading Indian art is present in Singapore’s Indigo Blue Art (indigoblueart.com) and Dubai’s 1×1 (1x1artgallery.com), both of which have attracted significant attention in recent years at the foreign gallery- heavy Indian Art Fair in Delhi.

Perhaps the strongest evidence of Indian art’s place in the global market, however, comes from a space distinctly not Subcontinent-centric: London’s Grosvenor Gallery (grosvenorgallery.com). During July, its new acquisitions exhibition featured works by such stalwart Indian painters as F N Souza and F H Husain next to those of fiftysomething Indians like Dhruva Mistry and Dilip Sur, all of which, significantly, shared the show with works by British sculptors Reg Butler and Eduardo Paolozzi, among other international names.

Indian art is, of course, also making quite a splash at home, so it is impossible to say just how long reasonably priced pieces will continue to be available abroad. What seems certain is that Indian artwork is on the world stage to stay.

Look But Don’t Touch
A few major exhibitions are afoot across the globe which showcase Indian artists. Here are a few of which to take note.

Paris-Delhi-Bombay…
Centre Pompidou, Paris until 19 September
A selection of works by Indian and French artists, all looking at various aspects of Indian society.

Indian Highway
MAXXI, Rome; until 29 January 2012
A broad spectrum of works, in many media, from contemporary India.

Generation in Transition
Zacheta National Gallery of Art, Warsaw
The autumn exhibition focuses on the works of young artists living both in and outside of India.