Long a showcase for architects, the public sanctuaries library is experiencing a resurgence, even as the popularity of books seems to be in decline. Brian Noone explores the paradoxes 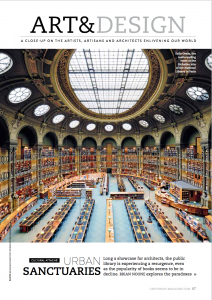 Over the past year, there has been no issue more divisive among New York intellectuals than the renovation plans for the lion-guarded New York Public Library on the corner of 5th and 42nd. When library president and CEO Anthony Marx announced the $300m scheme – which would transform the seven subterranean floors of currently inaccessible stacks into a lending library – the reactions were immediate and passionate, even though the Rose Reading Room, the building’s capacious magisterial centrepiece, will remain untouched. Supporters welcomed the democratisation of one of the city’s most rarefied public spaces, while detractors inveighed against the destruction of one of America’s premier academic study centres.

Whatever finally happens in New York, two facts emerge clearly from the fracas: people care about libraries, and they care for different reasons. Both temples of knowledge and utilitarian cross-cultural conduits, libraries undoubtedly count among the most fascinating – and beautiful – urban structures. And right now, with tensions boiling, is a good time to look. After all, if the New York controversy is anything to go by, they might not be around in their current state for very long. 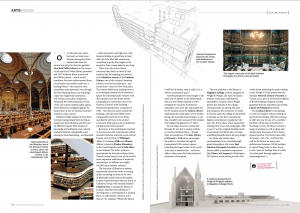 There is no city more culture- conscious than Paris, so there is little surprise that the ongoing renovations at the Richelieu Branch of the National Library, one of the country’s keystone edifices, were far less ambitious – and contentious – than the New York plans. The scholar-filled main reading room is an archetypal example of the cavernous spaces that simultaneously overawe with their opulence yet also foster private contemplation. Across the river at the National Library’s main building – Mitterand’s grand projet, completed in 1996 – the only awe comes outside the building, with the book-filled towers rising ponderously above the Seine matched by tall trees in the central courtyard, while patrons sit in pedestrian reading rooms below ground.

Reverence is the predominant reaction to the centuries-old, meticulously crafted monastic libraries scattered across central Europe, such as those in Wiblingen Abbey in Germany, Melk and Admont Abbeys in Austria, Strahov Monastery in the Czech Republic and St Gall Abbey in Switzerland. The latter, a Rococo masterstroke by Austrian architect Peter Thumb, is also home to one of the world’s most important collections of medieval manuscripts, in addition to roughly 160,000 more modern volumes.

The function of libraries as solemn repositories of serious books is coming under increasing scrutiny, as the role of physically printed tomes diminishes. London-based developer Martyn Evans of Cathedral Group, who recently finished Clapham One, a community library in London, describes the building as “a meeting place, a working place, a reading place, an information resource and a theatre”. He explains, “Whilst the library is still full of books, what it really is, is a vibrant community space.”

Another perspective was brought to the small city of Almere in the Netherlands when its new library opened in 2010. Designed by Concrete Architecture Associates, who were also responsible for the W London hotel, the Almere Library emphasises the retail aspect of the facility, laying out the books and seating in a way that wouldn’t seem unusual if the volumes were replaced by glassware or T-shirts.

By and large, however, community libraries do not aim to inspire visitors so much as facilitate them – though there are exceptions. The State Library of Victoria in Melbourne encourages the public to circulate through its monumental 19th-century spaces – including the largest dome in the world at its time of construction – and even offers a chess room for both study and enjoyment of the game.

The new addition to the library at Magdalen College, Oxford, designed by Wright & Wright, also aims to balance modern study space with historic atmosphere. Architect Clare Wright praises the attitude of the college, whose grounds are among the most picturesque in the university. “In order to stay the same the college is committed to change, so that they maintain the highest contemporary standards,” she says. Her firm’s plans, which expand the existing library into the quadrangle, offer a way to “see the original building much more clearly, but there’s also, we hope, something beautiful about the new design”.

For those who prefer silent contemplation in an overwhelmingly grand atmosphere, the iconic Real Gabinete Português de Leitura in Rio de Janeiro offers a superlative experience. The Library of Congress in Washington DC boasts a stately setting as well, with a 49m dome sheltering the main reading room, though it is less ornate than the baroque National Library of Austria in Vienna, set in part in the former residence of the Holy Roman Emperor, and less grandiose than the marvellous neo-Gothic Library of Parliament in Ottawa.

The London Library is attempting to retain its majesty without relying on government funding. With fees starting at £445 per year for use of its excellent facilities, which date to the library’s founding in 1841, the library attracts a range of scholars as well as those who simply enjoy the peace of its St James Square location. The library does offer day passes – for a fee – and this may well be the future for many such architectural treasures. Which perhaps is a good thing: better to have to pay to see a piece of heritage than to watch it be destroyed through neglect or mismanagement.